‘Pushing the frontiers of Roman identity: An examination of the northern frontier system of Britannia and the interaction of identity with the landscape’

How did the existing landscape (natural and cultural) affect the establishment, operation, nature and function of the Roman frontier in the north of Britannia, and what was the on-going relationship between people and the border landscape into the Roman period in this region? Did this relationship vary across the wider frontier region of northern England / southern Scotland? This research aims to conduct a broad landscape study along two transects across the Roman northern frontier in Britain, assessing existing archaeological data-sets and utilising aerial and ground-based remote sensing techniques to create new data.

The aim is to examine broader patterns of later Iron Age / Romano-British indigenous settlement alongside the more well-studied Roman military sites and infrastructure and place them in their wider landscapes for the region. It will also investigate the dynamic interaction between the various landscapes in the region and the identities (of both military and civilian inhabitants) at play in a frontier environment, before examining how this relationship and the character of the landscapes subsequently changed and developed over time.

By studying the frontier in-depth, taking in not only the line of Hadrian’s Wall and its immediate hinterland but also the outpost forts and settlements to the north and the landscapes supporting the wall further south as far as York, the broader trajectories at play in northern Britannia will be examined. The research also hopes to assist with management and conservation of archaeological remains in the north of England via its assessment of the survival of archaeological features, and also the methodologies used to investigate and record them.

The aerial survey element of the project will be undertaken with the help of Historic England and the mapping produced will be incorporated into the wider work of HE’s National Mapping Programme, supporting broader understanding of the landscape archaeology of the region.

Ian has an MA in Landscape Archaeology (2012) and a BA (Hons) in Archaeology (2011) from the University of York. His undergraduate dissertation looked at archaeological evidence for military and civilian identity in the Roman legionary fortress of York, while his Masters thesis developed this to look at the relationship between Roman identity and the wider landscape for the wider frontier region of northern Britannia via evidence for environment, dietary consumption and practice.

An accredited member of the CIfA with an NVQ in Archaeological Practice, Ian is a trained specialist in aerial survey, analytical earthwork survey and geophysics, and has worked in both the commercial sector and for English Heritage / Historic England in these fields. He most recently project-managed two largescale aerial mapping projects in the north-west of England for the National Mapping Programme.

Ian has also undertaken outreach with various community groups and the general public, working with the Institute for the Public Understanding of the Past to create a walking trail on Roman York for York Museums Trust, volunteering with the National Trust in Suffolk, and providing skills training to volunteers in Wiltshire and Yorkshire in both geophysical and aerial survey.

Along with his academic research on the north of Roman Britain, Ian has worked on various research projects in Wiltshire and the Vale of York looking at Iron Age and Roman rural settlement. His wider research interests include landscape archaeology, past environments, non-intrusive archaeological survey techniques, later prehistoric through to early medieval landscapes, military archaeology, border and frontier studies and archaeological identities. 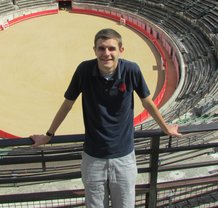