Visit Jonathan Finch's profile on the York Research Database to:

Prof. Jonathan Finch is an historical archaeologist who specialises in historic landscapes, rural poverty, slavery and commemoration. These key themes intersect and inform much of the seventeenth, eighteenth and nineteenth centuries under the broad heading of globalisation. His fieldwork has taken him from Harewood House, near Leeds, to the plantations of Barbados and he is recently completed directing excavations at Breary Banks, near Masham, a First World War camp where the 'Leeds Pals' battalion was trained.

He originally studied history at university, but was soon introduced to the practical joys of landscape interpretation and material culture and never looked back. He completed his AHRB funded PhD at the University of East Anglia in 1996. It was the first systematic study of historic commemorative practices that demonstrated the relationship between the forms and frequency of church monuments and social and economic factors.

He has written widely on designed landscapes of the eighteenth and nineteenth centuries, particualrly Capability Brown and Humphry Repton. He has also written on estate landscapes,including two edited volumes - the latest on northern European estate landscapes published by Aarhus University Press. He has also published work on the links between estates in the UK and the Caribbean, drawing on his fieldwork and excavations.

In 2020 Jon was appointed the Deputy Director of the Humanities Research Centre which provides research and career support for research students across the faculty. Previously he was a member of University Research Committee (2014-16), again representing the faculty. He is a member of the Centre for Eighteenth Century Studies.

My research clusters around three key themes: the post-medieval rural landscape, the impact and legacy of slavery, and commemoration. The relationship between these themes is important, and is manifest in publications on the designed landscapes of both slave-owning families and abolitionists, for example.

Trained as an historian and landscape archaeologist, understanding the cultural landscape of the eighteenth and nineteenth centuries has been fundamental to many of my research projects. At its heart is enquiry into the politics of landscape through its use and manipulation. The power of ownership is an important strand which was investigated in an editted volume Estate Landscapes and I have published on various aspects of the character, context and development of landed estates. I am now on the steering committee of a network on northern European country houses and estate landscapes.

The global connections of many landowning families and the discourse of colonialism led me to explore the links and discontinuities between the metropole and the colonial landscape. This research explored the estates and designed landscapes of landowners who engaged with the trans-Atlantic slave trade and compared them with those in the Caribbean. The award of a British Academy Small Grant enabled fieldwork in Barbados which resulted in publications on the first modern systematic fieldwork on one of the island's plantations, and on the construction of African identities within a plantation pot house, as opposed to within the slave village, where archaeologists have traditional looked.

The archaeology of the enslaved workers on plantations has developed into a wider interest in marginalised communities in rural landscapes, and is one which informs my recent excavations at Breary Banks (in partnership with the Nidderdale Area of Outstanding Natural Beauty as part of an HLF project) which was home to navvies, volunteer recruits for the First World War, and German prisoners of war in less than thirty years of occupation.

The construction of identities and the use of social memory was an early research interest which grew from my first monograph An Archaeology of Commemoration and it is a theme I am still developing for a future publication. The role of commemorative material culture is one that can reveal much about contemporary social values.

The excavation of the medieval manor house of Gawthorpe which was demolished in the early 1770s when the present Harewood House was completed. The project examines the cultural and economic gulf between Gawthorpe and Harewood, examining why the earlier building and its landscape was no longer 'fit for purpose' once the Lascelles family began to reap the profits of the Trans-Atlantic Slave Trade and their plantations in the Caribbean.

Landscape survey and excavation of an early twentieth century camp constructed in the Yorkshire Dales to house the work force of navvies working on local reserviours, but which - on the outbreak of the Great War - was turned over to the military and became a training camp for, amongst others, the Leeds Pals battalion. Before reverting back to a navvy camp at the end of the war it also served as a PoW camp for German Officers. The project will examine each of the four phases, exploring how successive groups lived within and related to the wider landscape.

The European Network for Country House and Estate Research is a network of curators, academics and professionals with a research interest in manors, country houses and their estates. It explores the regional variation and notable similarities in the history of such estates and buildings across northern Europe between c.1500 and the present. It also tackles the challenges of curating, presenting and interpreting those histories for the public. As well as being a member of the steering committee I organised an international confernece for the network in York in September 2016.

The tercentenary of Lancelot 'Capability' Brown's birth was marked with a year of celebrations in 2016, and this project sprang from a conference I jointly organsied with colleagues from Historic Royal Palaces and the universities of East Anglia and Sheffield. It critically engages with Brown's achievements, associates and legacies in the UK and Europe, and includes the contribution and defense offered by Repton (whose bicentenary it is in 2018) at the beginning of the nineteenth century as part of the 'Picturesque Controversy'.

I am a partner within the EUROTAST Marie Curie Initial Training Network, for which I supervise one PhD (Phulgence) and manage the second Experienced Researcher post (Morgan). The project is exploring the history, archaeology and new genetics of the trans-atlantic slave trade by supporting a new generation of science and humanities researchers to uncover and interpret new evidence on the history and contemporary legacies of the transatlantic slave trade.

Fieldwalking and landscape survey carried out at one of the plantations held by the Lascelles family of Harewood House from the eighteenth to the twentieth century. The project examines the plantation landscape in comparison with the agricultural landscapes owned by the same family in the UK, and explores the cultural connections between these two landscape types and the people who lived and worked within them.

I am currently working with two former PhD students on publications relating to commemoration in colonial contexts (Cook) and the development of military commemoration before the First World War (Clarke). Both projects build on themes established in my monograph on the archaeology of commemoration across the medieval and post-medieval periods. They will explore the politics and social context of commemoration, exploring the agency of the monuments in the construction of social memories and identities.

I would welcome enquiries and applications for research degrees on any of the topics mentioned below: 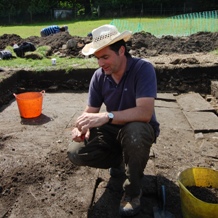