John is a highly experienced archaeologist and heritage professional with a strong international reputation. Prior to his appointment to York in 2010 and following a PhD in prehistoric archaeology, John spent 21 years with English Heritage in heritage protection and policy. Through its Characterisation Team, he led English Heritage’s research and policy development on recent military heritage and other aspects of the contemporary built environment. During his time at York, John was Head of Department from 2012 to 2018, and was Executive Editor for the leading Archaeology journal World Archaeology, from 2014 to 2018. John is a Fellow of the Society of Antiquaries of London and a Member of the Chartered Institute for Archaeologists.

With around 200 publications to his name, John is a creative and original voice in the fields of critical heritage studies and contemporary archaeology. He is regularly invited to teach, examine PhDs, collaborate on research or deliver keynote lectures around the world and has done so on every continent except for Antarctica. He has a particular affinity with northern Europe and Australia, holding adjunct positions at the universities of Turku (Finland) and Griffith and Flinders (Australia).

From a background in prehistoric archaeology, John’s research shifted focus sometime during the 1990s while working for English Heritage. The ‘turning point’ was the attention being paid elsewhere, but not in the UK, to the legacies of the Second World War as the 50th anniversaries of 1945 drew close. In a new role as Head of Military Research Programmes, John took up this particular challenge within English Heritage, before swiftly extending his research beyond just military activities to other aspects of contemporary life which had also left their mark on the landscape. Twenty-five years later, his research interests focus on the contributions of archaeology and cultural heritage to addressing some of the world’s most urgent problems, and to the relationships between people, place and identity. He still writes about archaeologies of recent conflict and their legacies as heritage.

Currently John is working with marine biologists in Galapagos, Chile, the UK and Australia, demonstrating how archaeology can contribute meaningfully to addressing the global challenge of marine plastic pollution. In Galapagos, and with his PhD student Estelle Praet, he is working with the Galapagos Conservation Trust, a project specifically focused on the impact of marine pollution on the archipelago’s iconic World Heritage status. It has been estimated that over 5.25 trillion plastic items (in the form of both objects and particles) are in the world’s oceans. For most scientists involved with researching marine pollution, these items are variously described as litter, debris, hazardous waste, pollutants, garbage or simply plastic. For archaeologists, all of these items are also artefacts or material culture, comprising a vast, global toxic assemblage that, in large part, characterises the contemporary world: our ‘Plastic Age’ or, as an epoch, the ‘Plasticene’. John’s work has taken an archaeological ‘object biography’ approach to these items, recognising that they are in the ocean only because people put them there. As John says: ‘By using Citizen Science to involve local people in this story-telling process, and emphasising the parallels between stone tools and the waste material created in their manufacture on the one hand and plastic waste on the other, we can change the way people think about this waste and its sources, and so encourage people to begin to think differently about their impact on the world.’

Some of his other projects can be found detailed below.

John welcomes applications from PhD candidates in any of the subject areas described here, but in particular where projects align with the following keywords and phrases:

His current PhD students and their research topics reflect the breadth of John’s research interests: 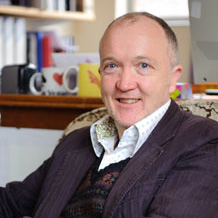