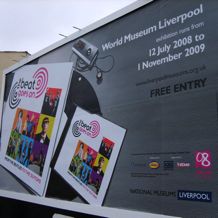 In order to explore this relationship between music and urban environments the project has conducted research on groups of musicians in Liverpool, particularly those involved with rock and hip hop music. We (specifically BL) traced the journeys and routes of these musicians as they engage in regular music-making activities. We also explored the real and imagined sites connected to their music-making, including buildings and neighbourhoods. We wanted to know how musicians inhabit and experience such sites and how they interpret them, associating them with particular ideas and emotions. We therefore interviewed and hung out with musicians, as well as consulting archives for relevant information on local music-making. In addition, we used maps as a research tool. This involved collecting maps and showing them to musicians but also getting musicians to draw their own musical memory maps. It also involved analysing the spatial, geometric patterns that emerged from these maps and what they might tell us about music, landscape and environment, the positioning and clustering of music sites, for example, as well as musical trails, boundaries and edges.

Liverpool was a fascinating and appropriate setting for this research. Popular music played a significant role in the construction of Liverpool histories and identities, and there have been rapid and dramatic changes to the city's landscape brought about by de-industrialisation and successive and intensive regeneration programmes. Moreover, Liverpool's status as World Heritage Site and European Capital of Culture 2008, in addition to its 800th anniversary in 2007, have accelerated elements of the regeneration process and heightened reflection and debate upon the meaning, significance and ownership of 'culture'; local character and distinctiveness; and how culture and creativity shape, and are shaped by, specific urban environments.

You can read more about this project in the magazine British Archaeology. More information can be found on the project website, from which some music recorded as part of this project can be downloaded free of charge: http://www.liv.ac.uk/ipm/research/musicscapes/index.htm. The wider topic is discussed in a number of papers in a themed volume of the journal Popular Music History. A related museum exhibition, The Beat Goes On, can also be accessed online at: http://www.liverpoolmuseums.org.uk/wml/exhibitions/thebeatgoeson/. An English Heritage book about this project, and about Liverpool's musical heritage is in preparation.

This project was funded by the AHRC Landscape and Environment Programme.