Nicky's research focuses on the Final Palaeolithic, the Mesolithic and the Mesolithic/Neolithic transition. She went on her first excavation whilst still at school and since then has excavated whenever she could. She has co-directed a number of projects: the Mesolithic hut at Howick, shell middens at Baylet, a Long blade site at Flixton Island and a 15 year project at the famous Early Mesolithic site of Star Carr.

She has supervised over 25 PhD students and in 2019 was highly commended in the Times Higher Education awards as Research Supervisor of the Year. She has also won two Vice Chancellor's Awards for teaching.

She has given over 40 public talks on Star Carr and collaborated on a number of museum exhibitions including Star Carr at the Yorkshire Museum, The Rotunda and the Museum of Archaeology and Anthropology Cambridge.

Nicky currently sites on a number of boards, trusts and societies including

Nicky became Head of Department in 2019. She sits on:

Nicky's research mainly focuses on the Mesolithic period and at the moment is working on the Preboreal, Early Mesolithic (through Star Carr), as well as having a focus on the Mesolithic/Neolithic transition. Her research tends to divide across three key themes: palaeodiet and consumption practices; settlement and mobility; death and burial.

Nicky has projects which are based both in the lab and in the field and she aims to bring innovative approaches through the development of new themes. Her fieldwork is interdisciplinary in approach and her work at Star Carr involves working with over 20 specialists. She has also co-directed excavations on shell middens in Ireland with Peter Woodman, and excavations at Howick with Clive Waddington and Geoff Bailey.

Nicky completed a major AHRB project with Geoff Bailey on Coastal shell middens and agricultural origins in Europe. As part of this, she developed a critical examination of stable isotope analysis in identifying the role of marine resources across the Mesolithic-Neolithic transition in Europe. She has also made important new advances in seasonality studies, using marine molluscs and new biomolecular methods of palaeodietary analysis, coordinating her research with colleagues in five different countries.

I am interested in any topics which are related to the Mesolithic and the Late Palaeolithic.

As Head of Department, Nicky does not have a large teaching load but usually teaches on 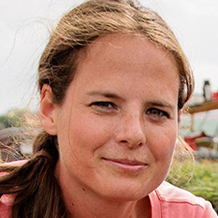