Julian originally intended to study History at University but claims that switching to Archaeology and Anthropology (which he studied at Cambridge) was one of the best decisions he ever made. He first came to York to take part in the Coppergate Viking excavations, but after a brief spell at the University of Leeds he returned to York in 1986 to lecture on Anglo-Saxon and Viking archaeology. The Department has grown tremendously since he first joined, when he was only one of five staff members with around a dozen students. It now has over 60 staff, with over 300 undergraduates and 100 graduate students. Nonetheless it has managed to retain a small community feel.

Julian is also Director of York's Centre for Digital Heritage, and from 2013-2019 he was the founding Director of The White Rose College of the Arts and Humanities (WRoCAH).

Julian specialises in the archaeology of Anglo-Saxon and Viking Age England, especially mortuary behaviour and settlement evolution. He has directed excavations of Anglo-Saxon and Anglo-Scandinavian settlements at Cottam, Cowlam, Burdale, and Wharram Percy. He has also excavated the only Viking cremation cemetery in the British Isles at Heath Wood, Ingleby. He undertook one of the first research projects to make use of metal-detected evidence to investigate the Viking and Anglo-Saxon Landscape and Economy of England, and he is currently collaborating with Professor Dawn Hadley, to investigate the Viking Great Army of the late 9th century and winter camp at Torksey, with an extended project, Tents to Towns, on the broader impact of the Viking Great Army.

Julian is also a leading expert on computer applications in archaeology and has authored and edited numerous books and papers on computer applications. He is Co-Director of Internet Archaeology, an electronic journal developed in York, and Director of the Archaeology Data Service, the national digital data archive for archaeological research. He is Deputy Coordinator of the European ARIADNE e-infrastructure for archaeological research.

Tents to Towns The Viking Great Army and its Legacy

WIST Corpus of Anglo-Saxon Stone Sculpture (with University of Durham) 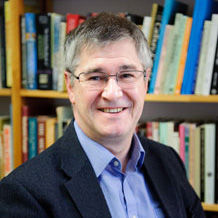