Visit Stephanie Wynne-Jones's profile on the York Research Database to:

Stephanie is an Africanist archaeologist who explores the links between people, landscapes, history and material culture. Her work is grounded in an understanding of daily life and human experience. In exploring this she has worked on understanding urbanism from the ground up, and has an ongoing fascination with the ways that people use and interact with objects. She has directed a series of excavation and survey projects in eastern Africa, including a study of resource us in early towns on Zanzibar and large-scale excavations at the World heritage site of Songo Mnara.

Her work includes a strand of community archaeology, working with collaborators locally to disseminate the results of research and also to explore how east African communities can benefit from their rich cultural heritage.

Stephanie has conducted fieldwork in several regions of the East African coast, including her PhD research at Kilwa Kisiwani, Tanzania, survey on Mafia Island (with Dr Paul Lane and Dr Bertram Mapunda), excavations at Vumba Kuu, Kenya (with the National Museums of Kenya) and along caravan routes through Tanzania, with work near Lake Tanganyika. She has recently completed a major campaign of excavation back in the Kilwa archipelago, at Songo Mnara (with Dr Jeffrey Fleisher). Excavations at this 14th – 16th century stonetown are aimed towards providing a richer understanding of the uses of urban space among the Swahili, and the ways that objects were bound up in spatial practices inside and outside the structures. The fieldwork is now complete, and the project monograph is in process.

This work at Songo Mnara builds on a broader interest in material culture and spatial practice as a route through which to approach issues of society, identity and interaction.

In addition, Stephanie has research interests in urbanism, and in the precolonial African past more generally. She is a core group member of the Centre for Urban Network Evolutions at Aarhus University, Denmark. Urbnet is funded as a Centre of Excellence by the Danish National Research Foundation, and seeks to explore the nature of urban formations in many parts of the ancient world. With colleagues at Urbnet, particularly Dr Federica Sulas, Stephanie is exploring Urban Transitions on Zanzibar, with a programme of excavation, sampling and off-site testing aimed at recovering the relationship between past towns and their environment.

Urban ecology and transitions in the Zanzibar archipelago (UETZAP)

This project, funded by the Leverhume Trust (2019-2022) is an exploration of the ways that early urban centres on Zanzibar drew on and affected their resource landscapes during two major periods of urban growth. Fieldwork at Unguja Ukuu (7th - 15th centuries) and Tumbatu (11th - 15th centuries) on Zanzibar will explore domestic contexts in detail, analysing the ways that local resources were used and built into the spaces of the towns. Sampling for geochemistry, plant and animal remains, will complement off-site survey for environmental change. The result will be a clearer understanding fo the relationship between these urban centres and their surrounding resource landscapes, and the ability to comment upon sustainability and cultural priorities for these early towns.

The MAEASaM project is a collaborative project funded by Arcadia, which is working to identify and document endangered archaeological heritage sites across eight African countries, dated from the Palaeolithic/Early Stone Age to the 20th century, then share this information to help protect them.

Storytelling about the Swahili past

This research project is working to produce materials disseminating the results of archaeological research in Kilwa region, Tanzania in ways that resonate with local communities. It builds on focus group wrk during the AHRC-funded CoNCH project, during which all participants requested a book in Swahili that told the story of the site. 'Storytelling' is producing a children's book about Kilwa Kisiwani and Songo Mnara. A book launch in Kilwa will be combined with the production of a video showcase, exploring local reactions to the book and additions to the story it tells.

Large scale excavations at Songo Mnara (2009-2017) were part of a collaboration with Dr Jeffrey Fleisher, Rice University, and were funded by the National Science Foundation (US) and the Arts and Humanities Research Council (UK). They were aimed at exploring the practices of daily life at Songo Mnara, a 14th - 15th century stone town on the southern coast of Tanzania. Excvations included large-scale testing of open spaces and household structures, exploring the distirbution of artefacts, faunal and botanical data as well as more ephemeral aspects such as soil chemistry and phytoliths. The result has been an unprecedented picture of the uses of space at a Swahili site. The project is currently being written up for publication as a site monograph.

Stephanie is happy to chat about PhD projects on any aspect of the archaeology of Africa, particularly eastern Africa. She is also happy to discuss projects exploring material culture and community archaeology.

Please just get in touch for more details.

Elizabeth Hicks - Communities of Consumption: an integrated approach to ceramic function and foodways along the Swahili coast during the first millennium AD

Sophie Rowson - The Materiality of Health and Safety: The origins and symbolism of high-visibility work clothing (co-supervision with Colleen Morgan) 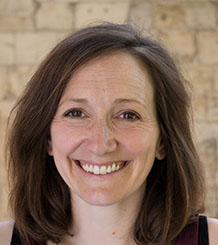