Visit Ashley Coutu's profile on the York Research Database to:

As a bioarchaeologist working with material culture from the last 2,000 years, I am particularly interested in using bioarchaeological methods with archaeological and archival data to map people and materials across the landscape to understand exchange networks. My background encompasses training in zooarchaeology, historical/medieval archaeology, environmental archaeology, and biomolecular archaeology. Because a significant focus of my research has been on the ivory trade across Africa and beyond, I am also involved in interdisciplinary research with historians, ecologists, and wildlife biologists. This research builds on historical ecology to understand the relationship between humans and elephants in the past and applies that knowledge to modern elephant conservation as well as preserving cultural heritage in protected landscapes.

I was a Marie Curie International Outgoing Fellow between the University of Cape Town, South Africa and the BioArCh laboratories in York between 2014-2017.  The project, entitled Tembo: Tracking Elephants: Mapping pre-colonial African ivory trade networks using Bioarchaeological techniques, analysed ivory working materials, ivory objects, and other small finds from over 20 sites in southern Africa dated to the Iron Age (700-1300 AD).  Using biomolecular methods such as stable and radiogenic isotope analyses, ZooMS, ancient DNA as well as non-destructive methods such as FTIR and SEM, the project highlighted early connections and trade networks between people in southern Africa. I also have been involved in a project with collaborators from the University of Illinois, USA and the University of Cape Town, South Africa, researching the remains of ivory and bone artefacts from a 16th century shipwreck excavated off the southern Namibian coast.

Prior to this, I worked as a postdoctoral researcher on the Entrepot project between Aarhus University, Denmark and BioArCh in 2013 tracing trade in Viking antler combs.  From 2007-2011, I worked as part of the Historical Ecologies of East African Landscapes (HEEAL) project at York using a combination of archival, archaeological, and biomolecular data to understand the impacts of the 19th century ivory trade on elephants, humans, and landscapes along caravan routes in East Africa.

Coutu, A.N. (2015) The elephant in the room: mapping the footsteps of historic elephants with big game hunting collections. World Archaeology 47 (3) 486-503.

The undergraduate teaching that I have been involved with at the University of York include these modules:

as well as teaching stable isotope and ZooMS laboratory preparation methods in the BioArCh laboratories for undergraduate and postgraduate students. 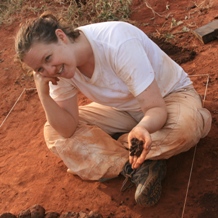