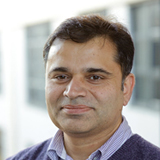 Kamran Siddiqi is a clinical academic with a background in chest medicine, public health and epidemiology. He works at the University of York as a professor in global public health and also holds an honorary consultant post in public health medicine at Public Health England. He is the director of an EU-funded Horizon2020 Consortium on TB & Tobacco. He co-leads the respiratory diseases group at the Global Alliance for Chronic Diseases. Previously, Kamran has worked as a consultant in chest medicine and in public health, education advisor to the National Institute of Health and Care Excellence (NICE), and medical officer at the World Health Organisation. He chaired the tobacco control section at the International Union Against TB and Lung Diseases between 2015-2017. He has served at several national funding boards and NICE guideline development committees. Kamran has published extensively on TB diagnosis, tobacco control and smoking cessation.

His current focus is on building research capacity in South Asian countries in tobacco control. He is leading a major programme of work investigating ways in which interventions designed to encourage people to stop smoking can be integrated into tuberculosis (TB) control programmes. The ultimate goal is to improve the health and longevity of patients suffering from TB, as well as decreasing the number of people who suffer from tobacco-related diseases. The research is centred on three countries with high TB and tobacco burdens, namely Bangladesh, Nepal and Pakistan.

Kamran is also leading a research programme on developing and evaluating ways to protect children and non-smoking adults from exposure to second-hand smoke in South Asia. His current studies are evaluating such measures in schools, communities and health facilities.

He is keen to develop evidence and research capacity in addressing non-cigarette forms of tobacco that are popular in South Asia. One of these products is smokeless tobacco, which is consumed by more than 300 million people across the globe, yet little is known on how to control its use. Using policy research tools, Kamran is currently studying how to regulate smokeless tobacco supply chain in three countries including Bangladesh, Pakistan and the UK.