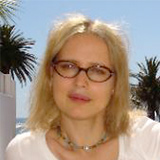 Louise Haagh researches and writes about problems relating to the democratisation of human development, economic justice, modalities of institutional change, and social transformation. Louise is also known for her advocacy for a broader humanist, democratic defence of basic income that sets this reform in the context of a human development perspective on freedom and the problem of democratisation of the public sphere. She has three books forthcoming with Palgrave, Polity, and Routledge on this topic.

Louise currently does research on comparative welfare state development in the United Kingdom and Denmark and on basic income and institutional and welfare transformation around the world.  Louise’s current research focusses on institutional, ethical and public finance aspects of welfare reform in OECD and middle-income countries. Her recent work focusses on drawing out a different account of varieties of capitalism in terms of the role of public sector development, institutional change and democratisation, as exemplified in Policy and Politics; Polity, and Basic Income Studies.

Louise is a world poverty, labour studies and social policy specialist working in the field of comparative labour market institutions, welfare regimes and the political economy of development.

Furthermore, Louise has also been a visiting fellow at a series of research institutes and universities internationally, including Cornell University (USA), Yonsei University (South Korea), and the Brazil Centre at Oxford University. She has held research fellowships from The British Academy and the Leverhulme Trust, and has carried out a series of research trips funded by these institutions and the Nuffield Foundation in the Americas and East Asia since coming to York. This work has focussed on the relationship between institutions and human motivation, and to that end testing standard behavioural models informing mainstream economics and public policy, as exemplified in Science Direct.

Louise Haagh obtained her doctorate in Politics from St. Antony's College, Oxford University, and held a British Academy Post-Doctoral Research Fellowship at St. Antony's from 1998 till 2001. In 2001 she took up a lectureship at the Politics Department of the University of York where she is now a Reader.