Flatfish and the origins of European marine fishing

This PhD project is part of the SeaChanges Innovative Training Network and aims to investigate the role of flatfish in the medieval marine fishing revolution and the development of North Sea flatfish fisheries through the medieval period. Fish consumption around the southern North Sea was largely restricted to freshwater or coastal species until the marine fishing revolution around the 10th/11th century. In this transition people switched to species that had to be caught in the open seas, as seen at archaeological sites dating from the 10th and especially 11th centuries in England and Flanders. The most abundant species overall are herring and cod, however flatfish or Pleuronectiformes seem to have been amongst the first species targeted during the marine fishing revolution. This might be due to their ecology. Certain species of flatfish occur in estuaries, brackish, coastal and marine environments. There are some hypotheses about the drive for people to make this switch to marine species, including a decline of freshwater species, increasing human population, religious traditions, or the opening of a new niche due to technological advances. Until now the flatfish part of this story has been somewhat left aside due to restrictions in identification of Pleuronectiformes bones, while they might hold more information about the precise events and impacts of humans during the transition.

This project has several phases, each with specific techniques and objectives. Firstly, it is necessary to refine taxonomic identifications of species of flatfish occurring in the North Sea and surrounding areas. A traditional comparative osteological study will provide a summary of diagnostic criteria to identify flatfish bones on skeletal elements. A geometric morphometric analysis will be carried out to better identify vertebrae in particular, since there are few characters on these bones that permit easy identification. If successful, this technique can easily be adopted by other people, possibly using an online app, to identify flatfish vertebrae.

Secondly, for skeletal elements that prove too difficult to identify using visual techniques, a molecular approach, called ZooMS, will be used to match an archaeological specimen’s collagen spectrum to a reference library, which has to be collected first using modern samples.

Once most flatfish bones can be identified to species level using visual and/or molecular techniques, stable isotopes will be used to provide information on the habitat where an archaeological specimen has lived and was caught. This is important since some flatfish species can be found in various marine or freshwater environments, and during the marine fish revolution there might have been a switch from the more riverine and estuarine fish to the more open marine waters living fish.

Finally, sizes and ages using vertebral growth rings will be calculated. From all this, it is possible to reconstruct a timeline, spread over different archaeological sites on both sides of the North Sea, for each species and see how the flatfish fisheries changed through time around the marine fishing revolution.

I am a biologist, with both Bachelor (2011-2014) and Master (2014-2016) degrees from the KU Leuven, Belgium. During my training as a general biologist, I mainly specialized in diversity and evolution, while still getting the necessary knowledge in molecular biology. My main research interest is morphology of vertebrates in an evolutionary context. It was during the Master’s thesis that I got introduced to zooarchaeology. Since previous studies had issues identifying African tilapia fish species, I got the opportunity to improve the osteological identification methods of this group as well as apply these new diagnostic criteria on fish material from a site in Libya.

After graduating in 2016, I got a job at the Royal Museum for Central Africa in Tervuren, Belgium, where I was a research assistant to the MbiSa-Congo project (2017-2019). This is where my career as an ichthyologist started. In this project I worked on the diversity and ecology of African freshwater fish that live in the Congo Basin by writing summative books on fish, doing DNA-analyses, working on conservation policies, and working on some case studies to revise certain taxa.

Thanks to my previous experiences, I can now unravel the mysteries of 1000 year old flatfish bones and what they can tell us about human society during the medieval period around the North Sea.

Dierickx K. et al., 2018. Out of sight, out of mind, out of care: on protected areas, fish diversity and its conservation in the Congo Basin. The 2018 Pan African Fish and Fisheries Association Conference, Mangochi, Malawi. 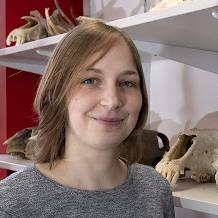