In 2019, the Archaeological Institute of America appointed Maureen as the distinguished Charles Eliot Norton Memorial Lecturer, inviting her to conduct a lecture tour of seven universities in Canada. She has been visiting professor at the Universität Basel and the Université de Fribourg in Switzerland, the Humboldt Universität in Berlin, and at McMaster University and the University of Calgary in Canada.

Maureen is a Roman archaeologist whose key research interests are Roman burial practices, funerary commemoration, and Roman childhood and family studies. She headed up the British team participating in a large EU-funded multi-national project (DressID) on Roman textiles and clothing, her focus being on dress and identity in funerary portraits on the Rhine and Danube frontiers. A further area of interest is the topic of Roman garden archaeology, on which she has published extensively.

She has directed excavations in Germany, Italy, Tunisia, and Britain. Her fieldwork project on a Roman imperial estate in Puglia in south-east Italy, funded by the British Academy/Leverhulme Trust, the Roman Society, the Social Sciences and Humanities Research Council of Canada (SSHRC), and the Rust Family Foundation, was published in spring 2022.

She currently is conducting a project, funded by the Leverhulme Trust, on Dress and Identity in Early Roman Southwest Italy. This project investigates the interconnected relationship between dress behaviour, ethnic identity, and social status among independent population groups in regions south of Rome in the 4th century B.C., as revealed in painted funerary portraits in the tombs of indigenous elites in Campania and Lucania.

Maureen is also engaged in research on a forgotten Etruscan funerary sculpture of the 3rd century B.C. that was donated to the Yorkshire Museum in the 19th century, in preparation for a new cutting-edge display in the Museum.

Maureen published her research on Roman childhood in 2018 in the volume Infancy and Earliest Childhood in the Roman World. ‘A Fragment of Time’ (Oxford University Press). Maureen’s work integrated archaeological and skeletal evidence, material culture, and iconography with social and cultural history, dispelling the long-held notion that very young children in the Roman world were marginal beings without any social significance whose lives were treated with indifference in an age of high infant mortality. This research was supported by the Balsdon Fellowship at the British School at Rome and a Leverhulme Research Fellowship. She also has researched the role of supplication and votive dedications in promoting maternal health and family continuity, and in 2016 she was the Hugh Last Fellow at the BSR with a project on the role of Roman religion in ideas about female fertility, pregnancy, and childbirth. Her publication appeared in the Papers of the British School at Rome in 2019.

Maureen’s recently completed fieldwork project focused on the Roman imperial estate at Vagnari in Puglia in rural south-east Italy. Knowledge of Roman imperial properties in Italy chiefly has been derived from written evidence, so the excavations at Vagnari offered a fresh archaeological perspective on profound changes in social and political circumstances, population mobility, and economic regimes brought about by the imperial acquisition of land and labour. A comprehensive volume on the excavation, the structures, the finds, and the scientific analysis of artefacts, was published in 2022.

This project investigates the interconnected relationship between dress behaviour, ethnic identity, and social status among independent population groups in regions south of Rome in the 4th century BC, a time of political and cultural tensions in the region triggered by Rome’s aggressive expansion of its territorial control. It studies how clothing and bodily adornment acted as important identity markers by focusing on the painted funerary portraits in the tombs of self-confident Italic elites in the region. These provide a valuable and unique tool to explore diverse and changing ethnic, social, and cultural identities for which no written testimony exists.

The main focus of this study on dress are figural wall paintings in the tombs of individuals and families of elite status in Campania and Lucania in southwest Italy in the fourth century BC. These portraits of people are our window on the dress behaviour of indigenous populations, and they reveal identities conveyed by inhabitants of the regions whose lives were subject politically to transformation and disruption. From the evidence captured in such images, it is clear that these peoples wore clothing that intentionally distinguished them from their neighbours with whom they might be in competition and from the Romans with whom they were in conflict. Figural images on contemporary painted ceramic vases, as well as surviving dress accessories, provide further insight. Furthermore, and for the first time, the project track transformations in identity signalling through dress, moving from various, distinct ‘Italic’ ethnic identities to a standardised Roman cultural identity.

An Etruscan Lady in York

Maureen’s recent projects include: Towards Revitalising Antiquarian Collections in the Yorkshire Museum:  An Etruscan Lady in York, and Linking Etruscan Italy with York.

These projects, in collaboration with the Yorkshire Museum, and funded by the York Impact Accelerator Fund and the York University Research Priming Fund, are investigating an Etruscan funerary monument of the 3rd or 2nd century B.C. that was purchased in Rome and entered the Museum collections as a donation in the 19th century. The sculpture is that of a reclining woman, and it forms the lid of a no longer extant stone ash chest that contained the cremated remains of this individual. In addition to cleaning the sculpture, surface samples are being analysed in the Department of Archaeology at York to detect traces of the original pigments used to paint the sculpture, and a 3-D model has been produced. The project also aims to locate stylistic and iconographic comparanda for the York piece in collections in relevant museums in Italy and to identify the Etruscan workshops in which the sculpture could have been made. A stone provenance analysis will further clarify the source of the material. The monument’s role in expressing status, age, and gender in its original social and funerary context will be communicated to scholars, students, and visitors in a new display in the Yorkshire Museum. The project supports the Museum’s interest in developing displays based on the early history of its collections, showcasing the diverse routes through which objects, such as the Etruscan lady, have travelled to York.

Melissa Kays, The Evolution of Access to Social Mobility for Women in the Public Sphere during the Roman Empire

Lucy Makinson, The Extent of Mediterranean Food Cultures in the Roman Civilian Settlements of Aldborough, Catterick, and Brough on Noe in Northern Britain

Kelsey Madden, From Conquest to Consumption: Evidence for the sexualisation and subsequent trafficking of 'barbarian' women and children in the iconography of Roman conquest (1st c. B.C. - 2nd c. A.D.), jointly with Dr Jane Rempel, University of Sheffield 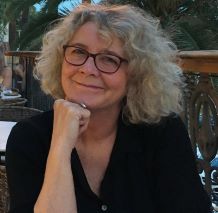 Fellow of the Society of Antiquaries (FSA)

Member of the Classical Association

Member of the British School at Rome

Member of the Editorial Committee, Journal of Roman Studies (since 2021)

Organiser of the international conference “Maternitas in Classical Archaeology”, the British School at Rome (2018)

Organiser of a workshop “Vagnari Roman Imperial Estate: The Settlement and the Material Culture”, University of Sheffield (2018)

October 2021, Keynote lecture, at the conference by the Society for the Study of Childhood in the Past, University of Otago (New Zealand): The Mother-Infant Nexus and the Social Construction of the Family in the Roman World

January 2020, University of Oxford: The Greening of Roman Architecture

October 2019, University of Toronto: Infancy and Earliest Childhood in the Roman World

March 2019, Keynote lecture, at the conference Protective Mother or Fertile Woman? The Polyvalence of Mother Deities, University of Graz: Mater Matuta and Her ‘Sisters’: Re-Examining Mother Deities and the Votive Phenomenon