After, between and during time spent in academia I have worked in commercial archaeology. This has included excavation and survey on a variety of projects in Ireland, the UK and beyond, and spells at Archaeological Services Durham University and the Landscape Research Centre. The perceived infrequency with which Mesolithic archaeology was encountered in the commercial sector and occasional tension within the entirety of the heritage sector brought me back to academia to undertake the PhD noted above. Despite the misapprehensions of many, neither Star Carr nor geophysical survey figured prominently in the thesis.

Current research has developed themes arising from doctoral work, most prominently understanding Mesolithic features. However, associated themes concerning field methodologies and effective communication of understanding the period are inherently embedded in researching the features. Many years as a surveyor has led to researching the role that geophysical survey, and more broadly remote sensing, has in identifying earlier prehistoric capture points in the landscape.

My current role is Project Manager on the Mesolithic Research and Conservation Project, funded by English Heritage. Through broad consultation the project aims to update the 1999 Framework to meet the challenges currently presented in Mesolithic research in England.

Mycenae Lower Town, Greece: Geophysical survey supervisor. Survey and associated excavation in the environs of the Bronze Age citadel are developing an understanding of the situation of the stronghold in its landscape context.

Investigation of c. 1300 PPG16-era developer-led interventions allowed the following aims to be addressed:

As a Project Archaeologist at ASDU I was fortunate to supervise two seasons of fieldwork for the Coquetdale Community Archaeology Project, though lost my first trowel in a Neolithic long cairn.  As well as contributing to Durham University's other fieldwork training projects I helped supervise on the Kidlandlee Dean Landscape Project.  Fieldwork undertaken abroad include seasons in Barbados, Croatia, France, Greece, the Republic of Macedonia and Oman.

For current information on this project, please click HERE.

The Framework is designed to represent the state of Mesolithic research and understanding today, and to inform future decisions, be it in identifying significant museum collections, deploying resources in a developer-led context, or to ensure that archaeological research deriving from all sectors has currency.

Developing a Mesolithic Research and Conservation Framework is an English Heritage funded project to update the archaeology community’s priorities for future research into the period. The three phases of the project comprise the compilation of a Resource Assessment, Research Agenda and a final Research Framework document, all of which we hope will receive broad-ranging responses from all sectors during the consultation phases. 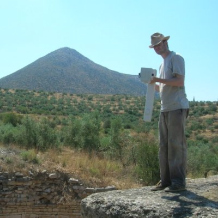