Electric field profile in a single period of a cavity grating

Design of a 4pi lens, a lens that produces a focused vortex beam with a charge of 2

The aim of our research is to understand and control the interaction of light and matter and to build functional devices that benefit from this understanding. Our core competence is the ability to design and fabricate photonic crystals and other wavelength-scale structures that manipulate the flow of light. The group's activities span the study of nanostructured silicon photonics, biophotonics, and photovoltaics.

Read about our research highlights here.

Organic vortex lasers could be used in future 3-D displays

Photograph of a high contrast grating fabricated on a 500um thick membrane, which is released from the substrate for use in MEMs applications

Silicon has long been established as the material of choice for the microelectronics industry. This is not yet true in photonics, where the limited degrees of freedom in material design combined with the indirect bandgap are a major constraints. Recent developments, especially those enabled by nanoscale engineering of the electronic and photonic properties, are starting to change the picture, and some silicon nanostructures now approach or even  exceed the performance of equivalent direct-band-gap materials. We are using our nanostructuring capability to further enhance the functionality of silicon-based devices. 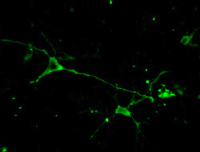 The thrust of our biophotonics research is to use the exquisite control over the light field available with photonic crystals to build highly responsive biosensors; in addition, we aim to exploit the strong spatial confinement to build  devices that combine high sensitivity with µm-scale spatial resolution, which is unique in the field.

Read more about our Biophotonics research. 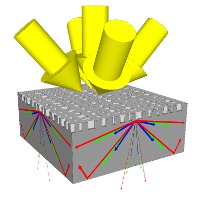 The goal of nanostructured photovoltaics work is to enhance the absorption of light in thin films that are ultimately cheaper to manufacture than conventional wafer based thick film cells. The idea is to couple the incoming  solar flux into a quasi-guided mode of the thin film thereby increasing its propagation length. Controlling the solar flux for this application is a particular challenge, because sunlight covers a broad range of angles and wavelengths.

Read more about our Photovoltaics research.