The York computational magnetism group is at the forefront of the‌‌ development of theoretical and computational approaches to the properties of magnetic materials and their applications,
‌ which include ‌magnetic recording and an expanding interest in biomagnetism. The group is led by Prof Roy Chantrell, appointed as a York University 40th anniversary professor in 2004 and Dr Richard Evans, appointed as Seagate lecturer in computational magnetism in 2015...  [Read more...]

Prof. Chantrell is to receive the Achievement Award of the Magnetics Society of the Institute of Electrical and Electronics Engineers. This is the highest award  of the society, and is awarded annually for  technical achievements. Professor Chantrell will receive the 2018 award, “For contributions to the theory of interacting spin systems and application to the understanding of magnetic recording media and ultrafast magnetization processes.” The award will be presented at the Intermag conference in Singapore in April. More information about the award can be found here

The winter school was designed for graduate students working in magnetism and related areas. It consisted of lectures by international experts and included poster presentations by participating graduate students. The program covered fundamentals and advanced topics in magnetism. It will be held with the aim of expanding the knowledge and cohesion of the magnetics community in Thailand.  The school was  an activity undertaken under the collaborative research between Mahasarakham University (MSU, Thailand), the University of York (UoY, UK) and Seagate Technology (Thailand, UK), supported by RAEng (Royal Academy of Engineering, UK) and TRF (Thailand Research Funding).

The group are working on a 10-year MagHEM Project, launched in November 2012.

‌
‌Richard Evans and Roy Chantrell are part of a consortium awarded funding of €400k under the FET programme within Horizon 2020.  ‌

We work closely with Seagate Technology, one of the two major manufacturers of Hard Disc Drives (HDD).  Read more...

An invited review article on atomistic spin models published by Dr. Richard Evans and coworkers has been highlighted as one of the leading articles of 2014 published in the Journal of Physics: Condensed Matter.  Read more...‌‌‌ 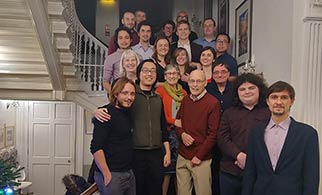 C-Mag going out on a limb on the cantilever near the summit of Glyder Fach in Snowdonia.

The first advanced VAMPIRE workshop will be held in the Department of Physics at the University of York between 10th - 15th September 2017.

We have been awarded the Industry Academia Partnership Programme (IAPP)

‌Welcome to Mara Strungaru, Samuel Ewan Rannala, Luke Elliott and Tim Nguyen who are joining us as PHD students.