The University of York has an answer to single-use plastic cups, and it works!

The University of York Catering and Hospitality team have released the latest figures from their YORCUP initiative and they show that the scheme has stopped 1 MILLION single-use plastic cups from going in to landfill in just 3 years*. 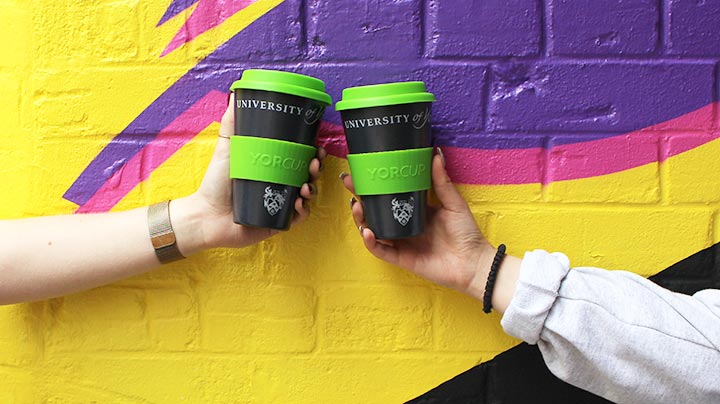 What is YORCUP and what has it achieved?

YORCUP is a cup scheme that was introduced in January 2019 after the Catering and Hospitality team at the University of York calculated that in 2018 503,677 single-use plastic cups had been used in their outlets.

The University already had a ‘Bring Your Own Cup’ scheme which meant any customers who brought their own cup for their takeaway hot drink received a 20p discount, and this had made a small difference but had not solved the problem.

In January 2019, they not only introduced a 20p latte levy in all of their outlets, but they also introduced the brand new cup scheme, YORCUP.

YORCUP is a cup scheme which allows customers to purchase a cup for £5 while getting their first drink free and avoiding the 20p latte levy. But the scheme also allows customers to hand back their dirty cup at any University outlet, while the customer keeps their sleeve. The next time they wish to purchase a hot drink, they simply show their sleeve and they get their drink in a clean cup and again, avoid the 20p latte levy.

“YORCUP is a well-designed solution to a common waste problem; it is easy to adopt, it benefits the users and it has clear benefits for sustainability. It has been good to see staff and students taking ownership of the scheme and citing it as an example of what they do to be more sustainable.” - Jo Hossell, Sustainability and Inclusivity Engagement Officer at the University of York.

In 2020, they reviewed the success of YORCUP and the latte levy and saw huge improvements. 4,101 customers had joined the scheme and annual single-use cup purchases had dropped from 503,677 to 272,329. The latte levy had also raised a whopping £32,654.26 which the University invested in more sustainable initiatives on campus and in the local community, donating food to local food banks and gifting money to a local ‘pay as you go’ cafe.

Jane Anness, head of Hospitality, Catering and Retail at the University of York said: “We are very proud that our scheme has raised the profile of our sustainability initiative in both the city of York and the wider field. Our commitment is demonstrated in us still running this scheme throughout the pandemic.”

Not only are the statistics proof of how well the scheme has worked, but it’s also a fantastic collaboration between the University, Commercial Services and the Students' Union - YUSU.

*based on reduction of cup purchases

Find out more about YORCUP and the Latte levy