The white rose conquered the red at this year's sporting tournament. Celebrate the rose triumphant.

York students showed resoundingly that roses are white, claiming 206.5 points to Lancaster's 159.5. Congratulations to all who took part!

Roses 2017 was a roaring success as students competed in the largest inter-university sports tournament in Europe. The competition reflects the historic rivalry between York and Lancaster, dating back to the Wars of the Roses. As the Carter James Trophy was restored to York hands, the white rose of york proved to be victorious once again. 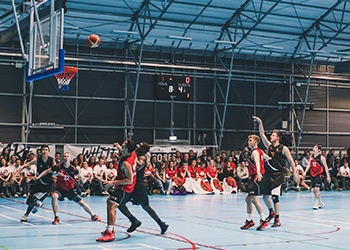 Hundreds of students took part across the weekend with excitement from start to finish.

The opening ceremony's basketball game proved particularly tense, as York snatched victory from the jaws of defeat, with a sudden change of fortunes in the last two minutes of the game.

The event was also successful in raising money for its chosen mental health charities, Mind Lancashire and Mind York. The total is still being finalised, with donations (such as all library fines collected over the weekend) still being counted, but at time of posting the total had reached nearly £1,500. The JustGiving page is still live and if you would like to donate online you can still do so.

Detailed results information is available on the Roses 2017 website. Well done to all our competitors and a warm thanks to the vanquished from Lancaster for making this the sporting event of the university year.