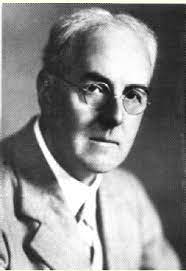 Born into a prosperous Quaker family Richardson was the youngest of seven children.  He began his education at Newcastle Preparatory School, and at the age of 12 was sent to York to attend the Quaker boarding school Bootham School.

It was at Bootham that Richardson developed an interest in science, encouraged  by J Edmund Clark, a school master who was an expert in meteorology.  His education at Bootham School reinforced his strong Quaker beliefs and especially his pacifism, which greatly influenced the way he led his life and the research topics he chose to dedicate his time to.

Richardson’s education was completed at King’s College, Cambridge in 1903, where he graduated with a First Class degree in the Natural Science Tripos.  Richardson went on to hold a large number of varied posts.  He worked in the National Physical Laboratory, the Meteorological Office, and was a Chemist with National Peat Industries.  He also held academic posts at the University of Aberystwyth and Manchester College of Technology.

After the war, Richardson returned to his position in the Meteorological Office, but resigned in 1920 when it became part of the Air Ministry.  In 1922  Weather Prediction by Numerical Process was published.  In this volume, Richardson proposed for the first time an algorithm to compute weather prediction based on a mathematical model of the atmospheric conditions, rather than by predicting based on past observations.  The main drawback to his mathematical technique was the time necessary to produce such a forecast.  He calculated it would need 60,000 people working with slide rules to predict the weather for the following day.  Richardson’s mathematical methods became more practical with the advent of computers after World War ll.

In 1926, Richardson was elected Fellow of the Royal Society for “his knowledge of physics and eminen[ce] in the application of mathematics to physical problems of the atmosphere and other structures”.  In the same year, Richardson moved away from researching meteorology. His dislike for war prompted him to use mathematics in the study of the causes of war and he published his studies in Generalised Foreign Politics (1939), Arms and Insecurity (1949), and Statistics of Deadly Quarrels (1950)

Richardson is also noted for his pioneering work concerning fractals and a method of solving a system of linear equations known as modified Richardson iteration.

The Richardson number, a fundamental quantity involving the gradients (change over a distance) of temperature and wind velocity, is named after him.

Although  Richardson’s contributions to Science are varied, and many attest to a mind ahead of its time, his interest in meteorology stayed with him throughout his life.  He retired to Kilmun, on the banks of Holy Loch.  Older residents of Kilmun recall him dropping parsnips off the pier to study how the currents moved them. He died in September 1953, the year before the first weather forecast appeared on the BBC.