Bestselling book highlights the growing gap between rich and poor

It's not every day a book on social epidemiology makes it to the best seller lists, but The Spirit Level: Why More Equal Societies Almost Always do Better, based on 30 years of research by two University of York academics, has proved a popular and inspirational text for everyone from prime ministers to the general public.

Authors Kate Pickett, Professor of Epidemiology and Richard Wilkinson, Honorary Visiting Professor at York’s Department of Health Sciences, have produced a book that has influenced political thinking and helped reignite the debate over the damaging economic and social implications of the UK’s growing North-South divide.

First published in 2009, this hard hitting study of inequality has been quoted by Prime Minister David Cameron and referred to by Labour leader Ed Miliband.

It has won numerous awards including the Political Studies Association Publication of the Year and the Bristol Festival of Ideas Award. The book was shortlisted for Research Project of the Year in the Times Higher Education Awards. The UK edition has sold over 112,000 copies and has been translated into 23 different foreign languages.

“To some extent what we hoped for when we wrote The Spirit Level has happened,” says Professor Pickett. “There is now much greater awareness of the effects of inequality among the public, policy-makers and politicians. There is more debate and more of an appetite for change.”

The Spirit Level suggests that societies with more equal distribution of incomes have better health and fewer problems such as violence, drug abuse, teenage births, mental illness and obesity. They are also more cohesive than societies in which the gap between rich and poor is greater.

And it is not just the poor who are disadvantaged as a result of these social ills. Wealthier people in unequal societies are more likely to suffer from mental illness, work long hours, get into debt and die younger than their counterparts elsewhere. It argues that if the gap between rich and poor in British society were closer to that of countries such as Japan, Norway, Sweden and Finland, homicide rates would fall, many prisons could close, life expectancy would increase and levels of trust would rise. 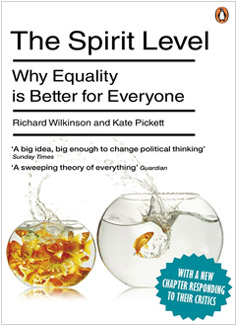 The book has generated fierce debate among social commentators, some of whom disagree with the carefully researched conclusion that Britain’s unequal society is causing major health and social problems for everyone – including the rich.

For the authors, there is some disappointment that the debate generated by the text has yet to be translated into significant political action, but for them, the fact the debate is taking place at all is good news.

“Valuing growth above equality causes problems for societies around the world,” says Professor Pickett. “Even allowing for the current economic circumstances, we live in an era of unprecedented prosperity, comfort and extravagance, yet we find ourselves more isolated, unhealthy and unhappy than ever.

The heart of politics

“Our research shows this will not change until we address the growing gap between the richest and poorest. The current political rhetoric around strivers and skivers highlights divisions between people and that’s exactly what is damaging.  But we don’t want our book to be seen as party political – the issues are too important for that. In a way issues about equality should be at the heart of all politics because they are fundamental to the way we live.”

“Societies reach a point where extra income ceases to bring the wealthiest any additional well-being and the gap between the richest and poorest has a corrosive effect on the quality of life enjoyed by all. We need to find a way of creating a more collaborative society that produces benefits for everybody.”

The Spirit Level continues to influence and inspire. It recently prompted an invitation to the authors to take part in a United Nations project to develop a new global economic paradigm that promotes wellbeing and the environment as the goals of development and economic systems. The project has been inspired by the work of the Government of Bhutan which hosted the project’s first working group meeting in January 2013.

The book has also inspired a documentary film which focuses on the effects on the global economy when wealth fails to trickle down.

The prize-winning authors are now busy writing another book, this time looking at how inequality affects individuals. It is due to hit the bookshelves around spring 2014.

The science of singing: Musical journey in search of a natural voice