The Great East Window of York Minster is the largest expanse of medieval stained glass in Britain and has dazzled visitors for six centuries. Preservation work led by Sarah Brown, a scholar in the Department of History of Art, will ensure that it continues to dazzle for centuries more.

Watch our video to see how research expertise developed at the University of York is helping to preserve York Minster for generations to come.

"He became a Yorkie," says Sarah Brown, a triumphant gleam in her eye. She is talking not of a former student who never left town or a colleague who stayed on after retirement, but of John Thornton, one of Mediaeval England's unsung heroes.

For six centuries, visitors to York Minster have stood in awe before its Great East Window, humbled and dazzled not just by the scope and scale of its evocation of the Beginning and End of All things, but by the pungent vividness with which the books of Genesis and Revelation are rendered in at times touching, at other times terrifying, detail and colour. Seventy-eight-feet-tall and about the size of a tennis court, the 311-panelled window is the largest expanse of medieval stained glass in Britain and regarded as one of the great pre-Renaissance treasures of European art. "Each panel is in itself a work of priceless art," says Brown – a stained glass scholar in the University's History of Art department, as well as the director of the York Glaziers Trust –"painted with the skills of a Van Eyck or a Vermeer."

The window is also the vision of one man: John Thornton, a glazier from Coventry, came to York to begin work on the window in 1405. He finished in 1408, receiving a £10 bonus to his £56 fee for completing the work on schedule. In 1410 he was made a freeman of York and, thinks Brown, later based himself in the city, though he continued to run a workshop in Coventry – he is also believed to have created the St William window, completed in 1413.

Of course Thornton did not work alone on the East Window, but it was clearly laid out in his contract with the Dean of York that he must cartoon (draw up the designs to full size) the whole work and paint a significant part of the window with his own hand. Close examination of each individual panel suggests Thornton ­– who would have had a whole studio working for him, probably close by the Minster – must have been a very hands-on boss. "It is clear from the consistency and quality of the whole that he supervised all the work closely," says Brown. 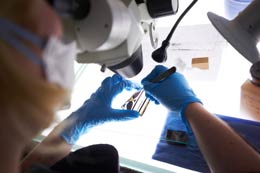 Restoration work on a panel of stained glass

For the moment, visitors to the Minster have to make do with a full-scale printed facsimile of the Great East Window instead of the real thing. Thornton's masterpiece is midway through a restoration being carried out by the specialists of the York Glazier's Trust – the centrepiece of York Minster Revealed, a major conservation and redisplay of the Minster funded in part by a £10.5m Heritage Lottery Fund grant – which will be completed in 2016. There is some recompense, however, in an informative exhibition focussed on The Orb, in which five conserved panels from the window can be viewed at close quarters. Complementary displays and computer interactives show digital close-ups of the individual panels, allowing you to see the painstaking process of their rehabilitation and how the latest forensic conservation techniques are adding to understanding of the window's past. For example, high-resolution photographs have revealed not just the original artist's brushstrokes but also fibres from their clothing.

How the window actually illuminates the Minster is also being improved. Before and after close-ups of the panels already restored reveal just how much extra leading had been introduced over the centuries in patched-up efforts to keep the glass in place. Today's restorers have used lead of the same thinness as in Thornton's masterpiece and taken advantage of modern conservator's glue. On the restored images you can still see vein-like lines where extra leading has been removed, but the uncluttered drawings can now be seen more clearly and, of course, more light will now be let in. State of the art external glazing will help preserve the conservator's painstaking work – some can spend as long as 600 hours on each individual panel. "This conservation should protect the window for centuries to come," says Brown. 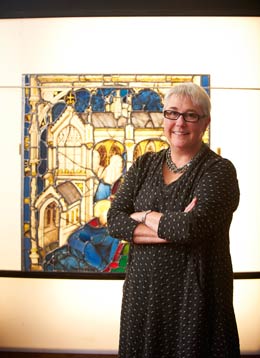 Brown's is a role that engages daily with the distant past, but also that past's future preservation. Few of us will ever be in the happy position of seeing a job advertised and knowing that we are one of only two or three people working in the world qualified to do it. That is, however, where Brown found herself when, five years ago, the University of York's History of Art department and the York Glaziers Trust decided to join forces. Their goal was to recruit a course director for an innovative two-year MA course in Stained Glass Conservation and Heritage Management who could also become the next director of the Trust (the body dedicated to the care of the Minster's windows and the preservation of historic stained-glass windows nationwide). Brown must have been a shoo-in: herself a postgraduate of the Centre for Medieval Studies, she has many years experience of working in heritage management, first at the Royal Commission on the Historical Monuments of England and latterly with English Heritage, and is also the author of an architectural history of the Gothic Minster and a guide to the stained glass. She started at York in September 2008.

"I had been living in the orbit of London for many years," she says. "But I had been a regular visitor to York and had always felt that if I were to move anywhere else then it would be here." Making her first half century sharpened the appeal of launching a new phase in her life. "It felt like the right time to take on a new challenge!"

Brown seems so happily settled in her cosy, book-lined corner office, with postcards of stained glass propped up in various places, that you would think she had spent her whole career at King's Manor, the Centre for Medieval Studies' historic headquarters just a short walk from the Minster. Her other place of work, the York Glaziers Trust, is also only minutes away, in Deangate. She is rightly proud of what her two-year MA programme has achieved in a short space of time. Despite costing twice as much as most Masters courses, it has been consistently oversubscribed, attracting a high calibre of students from the UK and overseas. "Recently the Burrell Collection in Glasgow – which has one of the best gallery collections of stained glass in the world – advertised for a new conservator. All of the candidates shortlisted for interview were graduates of this course," she says, beaming proudly.

So will she stay in York? "Oh yes I'm not going anywhere else now," she says firmly. Like Thornton, a Yorkie.