In a ground-breaking study, scientists in our Departments of Biology and Physics found that cells grown from prostate cancer tissue could be destroyed by LTPs. The discovery paves the way for a more cost-effective alternative to existing radiotherapy and photodynamic (PDT) treatments.

Low temperature plasmas are formed by applying a high electric field across a gas using an electrode, which breaks down the gas to form plasma. This creates a complex, unique reactive environment containing high concentrations of reactive oxygen and nitrogen species (RONS).

The research was carried out by Adam Hirst, a PhD student at the York Plasma Institute supervised by Dr Fiona Frame and Professor Norman Maitland in the Department of Biology’s YCR Cancer Research Unit, and Dr Deborah O’Connell from our Department of Physics.

Adam said: “Despite continual improvement and refinement, long-term treatment for prostate cancer is still recognised as inadequate. In the case of early stage organ-confined tumours, patients may be treated with a focal therapy, for example cryotherapy, photodynamic therapy, or radiotherapy.”

“However, around a third of patients will experience recurrence of their disease following radiotherapy. This may be due to the inherent radio-resistance of a small fraction of the tumour – the cancer stem cells. Furthermore, numerous side effects are often experienced following treatment.” 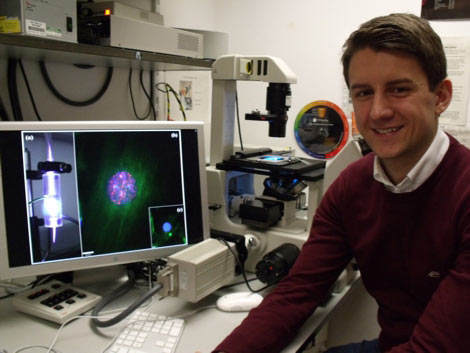 The way cell death occurs when using LTP treatment is different from other therapies. The active agents in the LTP break up DNA and destroy cells by necrosis, where cell membranes are ruptured, resulting in cell death. This is different to some current therapies which cause apoptosis, where cells are prompted to die through natural mechanisms that can result in treatment resistance.

Adam added: “Through this research we have found that LTPs induce high levels of DNA damage, which leads in turn to a substantial reduction in colony forming ability, and ultimately necrotic cell death. Using human cell samples, we have presented the first experimental evidence promoting the potential of LTPs as a future treatment for patients with cancer that is confined to the prostate.”

The next stage for the researchers is to carry out trials on three-dimensional replica tumours. If the trials are successful, LTP could be used to treat cancer patients with 10 to 15 years.

...we have presented the first experimental evidence promoting the potential of LTPs as a future treatment for patients with cancer confined to the prostate.”

Director of the YCR Cancer Research Unit, Professor Maitland is renowned for his his ground-breaking research on cancer stem cells.

Learning to live with lockdown

How can we avoid feeling low during lockdown?

Coping with medication side-effects could get easier thanks to our research.

Our research is now used by some of the internet’s biggest names to provide the most realistic 3D audio.