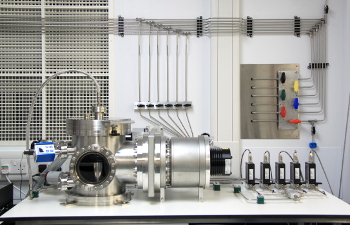 Reactive Ion Etching is an etching technique employed through-out the semiconductor industry, it uses a chemically reactive plasma to remove material from the sample.  An etch mask (either electron-beam resist, or photo-resist) is used to protect the parts of the sample that are to not be etched.  As such developing recipes for the RIE can be challenging as a balance between the etch rate of the sample and the etch mask must be attained to ensure that the sample is sufficiently protected.

This Reactive Ion Etching (RIE) system was designed while the group resided at St Andrews and parts such as the plasma table were fabricated by our technical team based at St Andrews particular thanks for this go to Steve Balfour.  The system as a whole was built in York with support from Steve.  It consists of a cylindrical vacuum chamber, with a plasma table (upon which the sample is placed) in the bottom portion of the chamber and a gas injection shower above and parrallel to this table.  We have designed the RIE to have as large as possible sample loading/unloading port (in this case the entire top of the vacuum chamber is a viton sealed port), this allows the use of large samples including complete wafers.  The majority of our etching is into silicon bases substrates as such the RIE is supplied with fluorine bases chemicals including SF6 and CHF3. 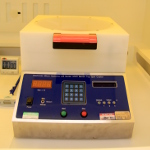 This bench-top version of the EMS 4000 Photoresist Spinner, allows the application of highly accurate coatings to process wafers, ceramics or other flat surfaces.  These spincoaters have a maximum rotation speed of 10,000 rpm.  Employing the bench-top version allows the cleanroom / wet-benches to be easily reconfigured if the need arises. 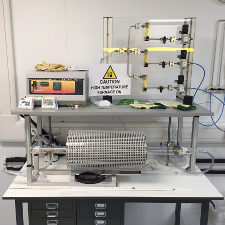 ‌The Carbolite MTF12/50/400 is a tube furnace capable of reaching temperatures up to 1200 C, it includes a programmable temperature controller using up to 8 segments.  Each segment comprising of a ramp followed by a dwell, which if required maybe set to zero time.  The furnace is principally used for the doping of silicon wafer chips, either with phosphorous or boron.  The furnace is also used for the growing of thermal oxide on top of silicon wafers which is then used as a chemical- or plasma-etching resist.  A separate quartz tube is provided for each process to avoid contamination and each tube is fitted for the introduction an extraction of process gasses of which we currently use argon, nitrogen, and oxygen. 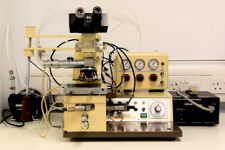 The MJB-3 is used for the alignment and subsequent exposure of samples coated in a UV sensitive photoresist.  This model originally used a 350W UV mercury lamp, however, we modified the system to use, a far simpler to implement, high-power UV LED.  This light source is now far more economical costing a fraction of the original to replace, the new light source also does not suffer from instabilities and does not require a "warm-up" time.  However, the UV LED is not as powerful as the mercury lamp as such exposure times have increased. 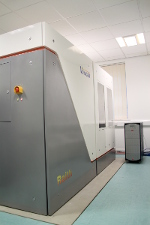 The Raith VOYAGER is a newly developed 50kV electron-beam lithography system.  It is both high-speed (up to 1cm2/hr, 50% coverage), highly accurate (up to 500um write-fields with real-time dynamic corrections), and high resolution (sub 7nm lines have been achieved in-house in HSQ).  The VOYAGER is the work-horse of the Photonics group, it is used to define all of the optical devices produced within the group.  It's high throughput allows for far quicker turn-arounds between simulation, design, fabrication and characterisation leading to extremely rapid prototyping of optical devices.  It's long term stability also allows much greater repeatability between fabrication runs. 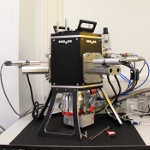 This bench-top deposition system, is fitted with three thermal boat sources.  Each boat can be loaded with a different material allowing multi-layer stacks to be formed on top of almost any loaded substrate.  The Photonics group use this system principally for metalising their samples, be this for charge dissipation for use in the VOYAGER or inspection by SEM, or as electrical contacts for some of the active devices we develop. 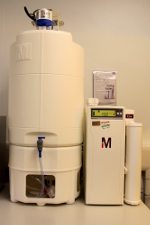 The Elix 5 system produces de-ionised water for use in the cleaning / preparation of samples.  The Elix system employs complimentary water purification techniques including pre-treatment and reverse osmosis to produce Type 2 pure water. 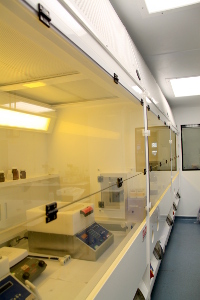 The Photonics group have three Falcon wet-decks installed within the cleanroom.  All exposed surfaces of each bench are composed of plastic, making each bench safe for use with all solvents and acids used by the group.  Each bench employ ULPA filters and have full-face shutters allowing the work areas to remain extremely clean which in turn increases sample yield.  The full face shields are also useful in protecting the cleanroom users, it is very easy to close a bench completely while performing a long wet chemical etch thus avoiding any danger for other users within the cleanroom.