The Astrocampus hosts numerous telescopes and instuments housed in three main buildings on site. The Astrocapsule is a classroom, laboratory and compter control centre for radio telescopes. The Rolling Roof hosts numerous optical and solar telescopses. The Observing Dome is home to the largest optical telescope on site.

Our main dome is home to the largest of our optical telescopes, a 16" Meade LX 200. It is mounted on a Software Bisque Paramount ME II and was installed in December 2015. This telescope is used for deep sky observing as well as for the stage 1 laboratory project. In the project studnets study the variations in brightness of the eclipsing binary star Algol, the star Astronomer John Goodricke studied from York in the 1780's. 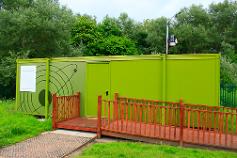 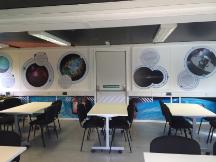 The Astrocapsule is used as a flexible classroom for students, laboratories and outreach activities. It is also the control centre for the suite of radio telescopes used on site.

The rolling roof observatory is equipped with optical telescopes suitable for night observations. Solar telescopes are also used which have filters which allow for safe daytime views of the Sun.

The student astronomical society, Astrosoc have a 12" Maksutov Cassegrain telescope for observing. There is also a 10" Meade Cassegrain which has great views of the moon. A further 8" Meade Lightswitch telescope is used by students and for public observing.

During the day up to five solar telescopes can be used for observations of the Sun. Three Coronado PST telescopes and one Solarscope can be used to observe the Sun in the hydrogen alpha of calcium K regions. These are used to observe features of the Sun such as flares and sunspots at different depths on the surface. A spectroheliograph uses a spectrograph to construct an image of the Sun in a single wavelength to study surface features.

Astrocampus hosts two radio telescope dishes that are used to observe the 21cm wavelength line emitted by neutral hydrogen situated in the spiral arms of our galaxy. Neutral hydrogen clouds are used to map out the spiral arms of the galaxy and measure the speed of rotation. Each dish has an additional head is used to measure methanol masers in the sky. These microwave analogies of lasers that originate from massive clouds of gas and dust where stars are being born. Each dish is 3 metres in diameter.

Two radio dipole antennas at Astrocampus are tuned to 20.1 MHz. These receive signals from the Sun and Jupiter as they pass through the beam. The dipoles are used to measure magnetic storms.