An open issue in this context was the identification of suitable observables in pQG corresponding to experimentally observed quantities. In contrast to other well-known gauge theories where the gauge symmetry only concerns internal degrees of freedom, the gauge symmetry of pQG – diffeomorphisms – moves points on the underlying manifold, and local observables (defined at a fixed point of the background metric) are not gauge-invariant and hence unphysical. The primary objective of the project was the study of non-local observables in pQG, which contributes both to our understanding of the fundamental forces of nature, and to a correct interpretation of future experimental results.

Besides advances in the mathematical description of these observables and the proof that a certain class of such observables are unsuitable from a physical point of view, the main result of the project is the construction of an observable that quantifies in a mathematically sound and gauge-invariant way the local expansion rate of the universe (the Hubble rate). Loop corrections to this observable were then calculated, which confirm a physical picture that was conjectured 25 years ago: the exponential expansion of spacetime during the inflationary period of the early universe produces large amounts of gravitons, whose mutual attraction then slows down the expansion. 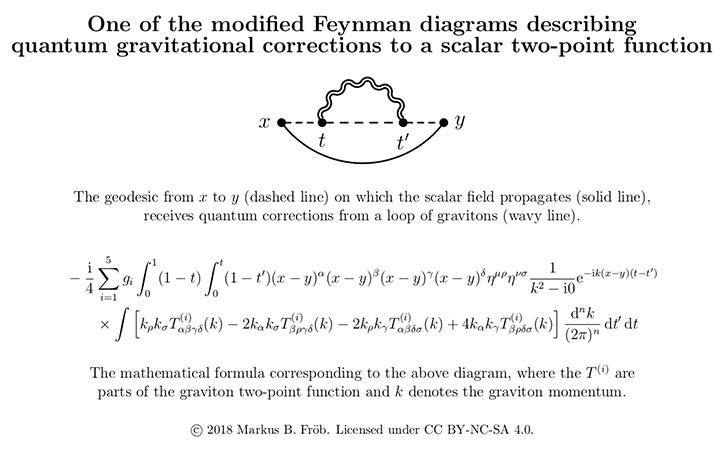 Details of the obtained results

Three main scientific achievements were made.

The first one concerns correlation functions at fixed geodesic distance in flat space including graviton loop corrections, where additional ultraviolet (UV) divergences appear because one restricts a distribution-valued operator (the graviton) to a line (the geodesic). It has been shown that these divergences can be renormalised at one-loop order by treating the embedding coordinates, which specify the position of the geodesic in the spacetime, as fields, and performing a wave function renormalisation for them. It has further been shown that the corresponding counterterms can be chosen such that the final result is independent of the graviton gauge fixing, and invariant under the renormalisation group, as it should be. However, as a remnant of the additional UV singularities, the renormalised result is strongly singular (as a distribution) near the lightcone, more than a usual one-loop calculation, and depends on the unknown finite parts of counterterms also for non-coinciding points. While mathematically rigorous, the result is therefore unsuitable to characterise graviton corrections in a physical way. These results have been published in a research article [M. B. Fröb, Class. Quant. Grav. 35 (2018) 035005, arXiv:1706.01891].

The second achievement concerns correlation functions including graviton loop corrections, where the position of the fields is specified by using a field-dependent coordinate system. While usually such a coordinate system is constructed by using four scalar functionals depending on the (perturbed) metric and matter fields, for example curvature scalars, which then define the field-dependent coordinates, this is impossible for highly symmetric backgrounds where these functionals are degenerate. Generalising an idea of Brunetti et al., the required four scalar functions were constructed as solution of the (perturbed) scalar wave equation (in flat space), to all orders in perturbation theory. One-loop graviton corrections to a scalar correlation function have then been calculated using these coordinates, and while the coordinate functionals are non-local, it has been shown that the correlation function is nevertheless renormalisable using the usual local counterterms. The obtained result is gauge-invariant and invariant under the renormalisation group, and does not show any of the unusual features of the correlation function at fixed geodesic separation. In particular, for non-coinciding points it is uniquely determined, and thus physically reasonable and predictive. These results have been published in a research article [M. B. Fröb, Class. Quant. Grav. 35 (2018) 055006, arXiv:1710.00839].

The third main achievement concerns the generalisation to cosmological backgrounds (Friedmann–Lemaître–Robertson–Walker spacetimes), where a scalar degree of freedom is responsible for the evolution of the background spacetime (the inflaton for inflationary spacetimes). In this case, the perturbed inflaton field/scalar degree of freedom can be taken as time coordinate functional, while the spatial coordinate functionals are again obtained as solution of the perturbed scalar wave equation. Again, these functionals are non-local, but the exact non-locality depends on the gauge chosen for the graviton. It was shown that in a particular gauge the non-locality disappears at linear order, and the graviton propagator in this gauge was constructed explicitly [M. B. Fröb, W. C. C. Lima, Class. Quant. Grav. 35 (2018) 095010, arXiv:1711.08470]. Using these coordinates, an observable was defined corresponding to the local expansion rate (which on the background spacetime reduces to the Hubble rate), and its expectation value at one-loop order was computed. It was shown that it can be renormalised using standard composite operator renormalisation for local operators, and explicit results were obtained in physically relevant cases: matter- and radiation-dominated eras and slow-roll inflation. The result confirms in a mathematically rigorous and fully gauge-invariant way a physical picture that was put forward 25 years ago: the expansion of the background spacetime generates gravitons, whose mutual attraction then slows down the expansion. In the case of slow-roll inflation, the one-loop quantum corrections lead to a diminution of the slow-roll parameters, while in the matter-dominated era even a secular decrease of the expansion rate was found. These results were published as a research article [M. B. Fröb, arXiv:1806.11124, submitted to Class. Quant. Grav.].

Three further scientific results have been achieved on the subject of gauge-invariant quantum gravitational corrections to observables, mainly in collaboration with others.

The first one concerns corrections to the Newtonian potential and its gauge-invariant relativistic generalisations for spinning particles, both in flat and de Sitter spaces. The corrections are induced by matter loops, and in flat space they are completely negligible, with the relative correction to the classical result being proportional to the square of the Planck length over the square of the distance to the particle for massless matter, and an exponential supression for massive matter fields. However, in de Sitter space there is an additional correction term which grows logarithmically with the distance to the particle and is proportional to the square of the Hubble constant. Upon resummation of the one-loop correction, this term leads to a slower fall-off of the gravitational potentials with distance, i.e., the gravitational force is enhanced. This research was done partly in collaboration with E. Verdaguer, Univ. Barcelona, Spain, and the results have been published in two research articles [M. B. Fröb, JHEP 10/2016 (2016) 51, arXiv:1607.03129], [M. B. Fröb, E. Verdaguer, JCAP 1704 (2017) 022, arXiv:1701.06576].

The second result concerns local observables in inflationary spacetimes. It is known that the graviton two-point function in the natural vacuum state is infrared (IR) divergent, but that the Weyl tensor two-point function is convergent. We have shown that the IR divergence does not show up in local observables, by demonstrating that the graviton field smeared with a smooth function of compact support (a test function) is equal to the linearised Weyl tensor smeared with another test function, which is determined in a precise way from the first one. In particular, the supports of the two test functions essentially agree, such that local measurements of the graviton correspond to local measurements of the Weyl tensor. This result had been previously proven for de Sitter space by the supervisor, and we have extended it to inflationary spacetimes, where one also needs to incorporate the perturbed inflaton field, such that the results contains an additional local IR-convergent tensor (in addition to the Weyl tensor). We have furthermore shown that these two tensors, together with the tensor resulting from linearising the Einstein equations, are in one-to-one correspondence with a complete set of local linear observables for inflationary spacetimes determined by Khavkine et al. This research was done in collaboration with T.-P. Hack, Univ. Leipzig, Germany and I. Khavkine, Czech Academy of Sciences, Prague, Czech Republic, and the results have been published in two research articles [M. B. Fröb, T.-P. Hack, A. Higuchi, JCAP 07 (2017) 043, arXiv:1703.01158], [M. B. Fröb, T.-P. Hack, I. Khavkine, Class. Quantum Grav. 35 (2018) 115002, arXiv:1801.02632].

The third result is about the renormalisability of the observables defined using the field-dependent coordinate system used above to all orders in perturbation theory. It was shown that also in Einstein spacetimes there exists a choice of gauge for the graviton such that the non-local contribution vanishes at linear order, and the graviton propagator in this gauge has been determined. It was shown furthermore that there exists a non-linear gauge for the graviton (and inflaton for inflationary spacetimes) in which the non-local terms classically vanish to an arbitrary fixed order, generalising the above results at linear order. To show in a mathematically rigorous way that in this gauge the invariant observables indeed are local, the Ward identities for general gauge theories and in particular perturbative quantum gravity were studied within the algebraic approach to quantum field theory and using the BV/BRST method. In particular, it was proven that the terms that appear in the Ward identities for interacting time-ordered products of fields form an L∞ algebra. Amongst other properties, this ensures that one can find contact terms such that the interacting time-ordered products of classically invariant fields are gauge-independent in the quantum theory, and that one can impose even non-linear gauges inside time-ordered products without anomalies. Lastly, a BRST-invariant interacting quantum state was constructed to all orders in perturbation theory, in which the non-local terms, which in the above non-linear gauge are BRST-exact, have vanishing expectation value, and the observables can be renormalised using the usual local counterterms. This research has been partly done in collaboration with M. Taslimi Tehrani, Max Planck Institute for Mathematics in the Sciences, Leipzig, Germany, and the results have been published in two research articles [M. B. Fröb, M. Taslimi Tehrani, Phys. Rev. D 97 (2018) 025022, arXiv: 1708.00444], [M. B. Fröb, arXiv:1803.10235, submitted to Comm. Math. Phys.]. The last result is currently being prepared for publication.