Is playing a real person, using their own words,  qualitatively different than appearing in a fiction? 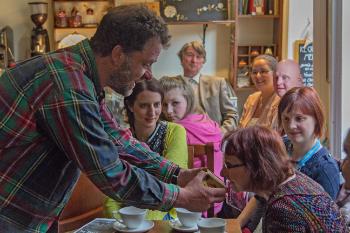 Common to both however is that the plays in these genres are constructed using the words of real people, a qualitatively different and unusual challenge for actors as compared to portraying fictional characters. This project explores this difference and attempts to understand how actors negotiate the ethics of playing a real person and how these considerations shape their performance.

To this end the project has already produced several output products including the 2013 monograph, Acting in Documentary Theatre, exploring the political and ethical demands of playing a real person. In addition, Tom Cantrell has also edited documentary plays, most notably Clocking In: Life in the Chocolate City, a professionally produced documentary play which was directed by Katie Posner and produced by Pilot Theatre.

This project worked with students in the Department of Theatre, Film, Television and Interactive Media to edit the play from interviews conducted with York residents who had worked in the Rowntree's and Terry's chocolate factories. It was performed in the York Cocoa House in the Summer of 2013 to 12 sell-out audiences.