I am a Reader in Theatre and Associate Dean for Learning, Teaching and Students in the Arts and Humanities Faculty. As Associate Dean I lead on the management, strategic initiatives and development of learning and teaching across the faculty. Within the School or Arts and Creative Technologies, I teach on the BA in Theatre: Writing, Directing and Performance and the MA in Theatre-Making as well as supervising doctoral research students.

My research addresses questions of performance and, in particular, acting processes. To date, I have published four books on acting. My recent research has been into acting processes for television (including Acting in British Television (Palgrave, 2017) and Exploring Television Acting, for Bloomsbury (2018), both written with Christopher Hogg), and documentary theatre (including Acting in Documentary Theatre, which was published by Palgrave in 2013, and a number of articles). I am currently co-editing The Theatre-Maker’s R&D Sourcebook for Bloomsbury and researching the work of the National Theatre Studio.

I’m an active member of TaPRA (the Theatre and Performance Research Association) with whom I co-convened the Performer Training Working Group. I was an expert witness for the House of Lords report ‘Training for the Theatre Industry’ (2017) and in my evidence I discussed our focus on employability for a range of roles in theatre and the wider cultural sector.

I have held visiting professorships at the Université de Picardie Jules Verne and Concordia University, Montreal, where I was scholar-in-residence at the Acts of Listening Lab.

My research addresses questions of performance and, in particular, acting processes. To date, I have published four books on acting. Recently, I have been researching acting processes for television with Christopher Hogg (University of Westminster), and have published a number of articles on this theme. Our work is the first detailed research into how actors approach the specific demands of television. Most research views performance via textual analysis of the finished product. By contrast, we use interviews with celebrated television actors to focus on their process, and how they bring their skills to bear on this particular medium. We have recently published Acting in British Television (Palgrave, 2017) and an edited collection, Exploring Television Acting, for Bloomsbury (2018).

My previous research has focused on how actors approach playing real people. I co-edited Playing for Real with Mary Luckhurst (Palgrave, 2010), which is a collection of interviews with high-profile actors who have portrayed real people on stage and screen. Interviewees included Ian McKellen, Eileen Atkins, David Morrissey and Joseph Mydell. I continued to pursue my interest in the challenges of playing real people in my monograph, Acting in Documentary Theatre, which was published by Palgrave in 2013. Including new interview material with over forty actors, directors and writers, my book was the first to explore the challenges of acting in documentary theatre.

I edited Clocking In: Life in the Chocolate City, a professionally produced documentary play which was directed by Katie Posner and produced by Pilot Theatre. Working with students in the Department of Theatre, Film and Television, I edited the play from interviews conducted with York residents who had worked in Rowntree’s and Terry’s chocolate factories. It was performed in a site-specific venue, York Cocoa House, for 12 sell-out performances in Summer 2013. It was also live-streamed by Pilot TV and was watched in 10 countries. The production was also recorded and is available to view on YouTube (https://www.youtube.com/watch?v=bhjiOTtk9YE). To date it has been watched by over 2,000 people. I also adapted the play for BBC Radio, and it has been aired several times on BBC Radio York over the past year, and is available via the BBC’s website (http://www.bbc.co.uk/programmes/p01xs8nm). 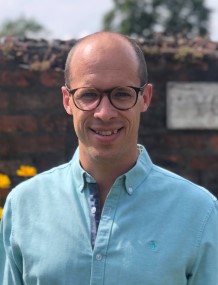