How can Brechtian approaches radically change the reception of plays not considered 'Brechtian'?

There is a perennial problem connecting Bertolt Brecht’s theories of a politicized theatre with examples of concrete practice. This project engages with Brecht's theatrical method by applying it to plays that were not written in the Brechtian tradition as well as disseminating research findings on Brechtian stagecraft. 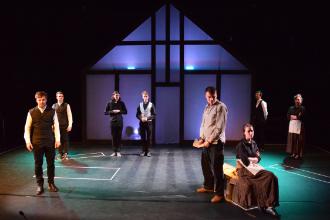 So far, the project has produced Closer by Patrick Marber (October 2016) and The Crucible by Arthur Miller (October 2017, pictured) in order to show how Brechtian approaches can radically change the reception of plays not considered 'Brechtian'.  In addition, as a result of this project, a series of workshops has been devised to be delivered to teachers and theatre-makers, introducing them to ways of exploring Brecht's theories in concrete theatre practice.

Find out more about the Brecht in Practice project on the project's website.