Scientists from the University of York are taking part in a national research project to measure air quality across the UK, which aims to provide new insight into the formation of air pollution and its impact on people. 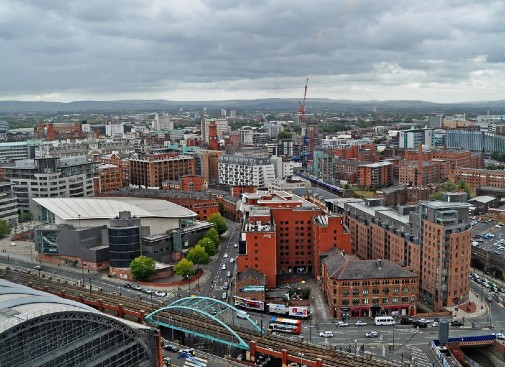 Manchester is one of the sites that York researchers are monitoring

Launched in the build up to Clean Air Day, (Thursday 17th June)  the six-week long study is the largest measurement campaign at the UK’s urban air quality supersites to date.

The project, called the Integrated Research Observation System for Clean Air (OSCA), aims to build a clear picture of what pollutants are being released in urban areas, and how chemicals react in the atmosphere to form secondary pollutants, such as particulate matter and ozone.

OSCA will bring together leading experts and observation equipment at urban measurement sites in Manchester, Birmingham and London, supported by the National Centre for Atmospheric Science.

Researchers from the University of York will be measuring emissions of solvents and other short-lived chemicals at the Manchester site in June and July, along with trialling state of the art sensors and laser instruments developed in the York labs.

Professor James Lee, from the Department of Chemistry and the National Centre for Atmospheric Science said: “Poor air quality is the largest environmental health risk in the UK. We know pollution emissions are changing, but it’s uncertain how this will affect the air we breathe.

“We are testing whether all sources of pollution are fully accounted for, and aiming to provide evidence that allows pollution controls to have the biggest possible benefits for our health and our environment.”

The intense monitoring schedule enables researchers to measure a much wider range of chemicals than during routine observations.

Scientists will be able to pinpoint new and emerging pollution trends, and quantify urban pollution sources such as tyre and brake emissions, wood-burning, and cooking emissions.

Dr James Allan,  from the National Centre for Science and the University of Manchester added: “We’re seeing a snapshot of the atmosphere at an enhanced level of detail. By carrying out many specialist measurements at the same time and in the same place, we’re maximising the information we get.”

As our transport systems, energy resources, and chemical products continue to develop, and the demand for them changes, monitoring air quality proves to be an on-going challenge for national and regional policy-makers.

Scientists say significant changes in the types and sources of pollutants are likely in the years ahead, and this has already been observed during the pandemic.

The detailed evidence acquired by OSCA will support regional authorities to develop made-to-measure air pollution controls, which respond to changing sources of pollution. Urban air quality research will also feed into wider efforts to manage air pollution across the country, which are expected to be announced later this year as part of the government’s Environment Bill.

The Integrated Research Observation System for Clean Air (OSCA) is part of the UKRI Clean Air Strategic Priority Fund, and is supported by the Department for Environment, Food and Rural Affairs (Defra).