New Head of Department is announced

The Department is delighted to announce Professor Martin Bees has been appointed as the new Head of Department from October 2021. 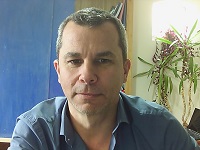 Taking over from Professor Niall MacKay who has been leading the Department of Mathematics since Autumn 2015, Professor Martin Bees has been announced as the new Head of Department from October 2021.

Martin moved to The University of York as a celebrated 50th Anniversary Chair in Mathematics in 2012, with a background in Applied Mathematics; specialising in mathematical biology, fluid dynamics and pattern formation. He has worked collaboratively with researchers in the departments of Biology and Physics, on projects such as the Royal Society/JSPS funded Orientational alignment of helical micro-swimmer trajectories in oscillatory flow, and the IUK/Unilever funded >Real time visualisation & modelling of biofilm inhibition by lactam, as well as with a Daphne Jackson Fellow on Optimising biofuel production in spatial models of wastewater treatment. To complement his work in Applied Mathematics, Martin has a containment level 2 wet laboratory in the Department of Biology, with equipment for bacterial and algal culture, high-speed microscopy, visualisation of suspensions of biased swimming cells and digital inline holography

Martin has previously taken on departmental roles as Chair of the Departmental Research Committee and Head of Section (Applied). On announcement of his new appointment he said, "Niall has done a fantastic job during his term as Head of Department so I have big shoes to fill. Thank you Niall for your leadership, dedication and boundless energy.  I hope that I can be of service to the Department by, for example, ensuring that we reserve, or even free up, quality time for research whilst upholding our high standards of teaching during periods of development."