Department of Chemistry featured in official album for Vote 100

The Department of Chemistry has been featured in the official History of Parliament Trust Vote 100 commemorative album, “Voice and Vote”. 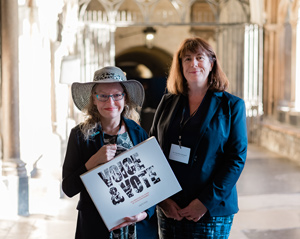 The album, which was produced as part of the official celebrations for the 100th anniversary of the Representation of the People Act 1918, narrates the story of women’s fight to get the vote and also looks at how the struggle for equality still continues today. It also provides a showcase for a number of organisations from educational, cultural, social, technological and business sectors with relevant stories to tell, and it is in these pages that Dr Caroline Dessent, chair of the Equality and Diversity Group, presents the Department of Chemistry.

“We want this department to be somewhere that’s fair to everyone,” says Dr Dessent in the interview. “That’s why we have equal and transparent policies. If you don’t, it is known to affect women more than men. But when you adopt good practice, it’s there for all.”

Dr Dessent also talks about how the Department of Chemistry is the longest-term holder of the Athena SWAN Gold award, how the percentage of female senior academic staff has risen from 7 to 22 per cent in the past ten years, and how there are male staff in the department who work part-time to share child care responsibilities. “It shows that our male staff recognise that our female staff are able to be highly successful scientists while working part-time. And men are doing it as well now.”

The book launch took place at Westminster Abbey on June 27, and was attended by Dr Dessent and Dr Leonie Jones, the Department’s Employability and Diversity Officer.