Viking warriors carried combs as well as swords and knives on their seafaring ventures, according to our archaeologists

Wild and mean looking Vikings with sharp swords and a taste for silver might be the traditional text book image of fearsome Norse invaders.

But behind the macho bravado it seems they had more than a touch of vanity about them.

Studies led by Dr Steve Ashby, in our Department of Archaeology, are shedding new light on this iconic sea-faring society by looking in detail at that most everyday object – the hair comb.

“The famous Coppergate dig in the late 1970s in York unearthed many examples of Norse combs,” explains Dr Ashby.

Deer antler - the material of choice

“You might expect these to be throw away objects, but in some cases they were superbly decorated, and all were massively over engineered. Specialised tools such as saws, rasps, and polishers were needed and deer antler was the material of choice.”

So why did the Vikings go to all that trouble? It suggests that for Vikings, hair formed an important part of their identity, says Dr Ashby.

A mark of distinctiveness

“We know from Norse sagas that hair had a great significance for Vikings as a mark of distinctiveness. They took a great deal of care with their grooming and often carried combs with their swords and knives on their belts. They frequently even took combs to the grave.”

It is an investigation relying as much on molecular analysis of bone material, work pioneered by Professor Matthew Collins at the University’s BioArCh laboratory, as on traditional archaeological techniques.

Dr Ashby's fascination with combs was sparked when, as a Masters student at York, he became involved in a debate about when the Vikings first arrived in Orkney.

Research in the 1990s suggested combs of pre-Viking style were made from reindeer antler, which could only have come from Norway, indicating that contact with Scandinavia must have begun earlier than thought. 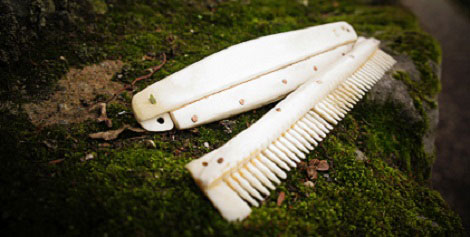 He concluded that none of the combs from secure pre-Viking contexts were made of reindeer, supporting the later more widely accepted date for the Vikings appearance in the Orcadian islands. This was later supported by the application of Professor Collins' freshly developed biomolecular technique.

But by looking at the way combs are manufactured, where they are found and what raw materials they use, we can also reveal many other fascinating details about Norse society and how international links developed.

Dr Ashby, together with colleagues from Aarhus University, recently helped establish that Vikings from the arctic north were trading with a western Danish outpost called Ribe by 725. That is seven decades before they appeared in Britain. Combs and associated manufacturing waste from early archaeological deposits in the town's old marketplace were discovered to be made from reindeer antler. As with Orkney, this raw material is not local so it was probably brought from Norway by northern travellers: perhaps the first Vikings.

“It's possible that such long distance trading gave the Norse the seafaring skills that would be used later to strike England,” adds Dr Ashby.

York is well placed to pioneer this research. The city – once known as Jorvik – was one of ten major Viking towns in northern Europe and became a thriving and cosmopolitan trading centre.

Comb craft was dealt its deathblow in England around the time of the Norman Conquest either because sourcing antler became much more difficult with the imposition of Forest Law, or because the need for such a showy piece of grooming kit was no longer felt.

But in northern Scotland, where Scandinavian contacts were maintained, and most combs seem to have been imported from Norway, the tradition continued until the 15th century.

So where does the story go from here? Using biomolecular techniques archaeologists can begin to answer long-standing questions.

Dr Ashby explains: “We want to look again at the early combs made in the 8th and 9th centuries and test them to see if they really are of Viking origin. If they are made from reindeer antler we can be confident they are.”

A review of later 10th century combs could also help shed light on trade and population movements between the British Isles, the southern Baltic region and Sweden and Norway. It could also illuminate the end of the Viking Age in Greenland and Iceland. Were they still importing combs at this stage or did they have their own industry?

“It's an exciting time and we may be able to find the truth about questions which we thought were incapable of being answered definitively.” adds Dr Ashby.

Urban Networks and Arctic Outlands: Craft Specialists and Reindeer Antler in Viking Towns was published in the European Journal of Archaeology

Searching for Scandinavians in pre-Viking Scotland: molecular fingerprinting of Early Medieval combs was published in Journal of Archaeological Science

York science at the heart of ambitious fusion energy bid

York scientists are at the centre of an ambitious bid to bring low carbon fusion energy to Yorkshire.

The Hepworth Research Network focuses on the materials Barbara Hepworth used in her artworks.

Blog: Unconvinced about reducing your carbon footprint? Then do it for the good of your health

Search for research and explore connections.

We showcase our research and encourage debate.