The response times of footballers is slowed down when part of the kit worn by both teams is of the same colour, a new study shows. 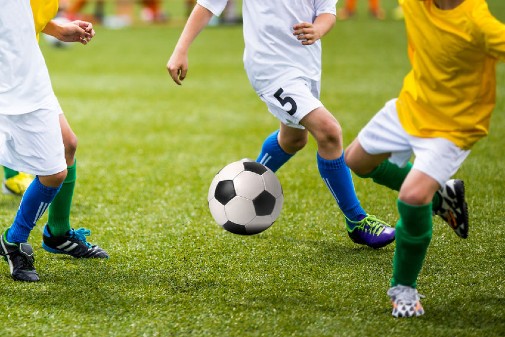 The research from the University of York revealed that when players have any kit colour clash – either shirt or shorts - it takes them twice as long to find a fellow player on the pitch.

Study authors are calling for a change in the laws of the game or for clearer guidance.

Researchers used two experiments to investigate how kit variations affect the visual search for teammates.  Their first experiment confirmed that a player’s ability to discriminate  is slower when playing in crossed kits, for example red shirts-blue shorts versus blue shirts-red shorts.

First author, former graduate, Liam Burnell from the Department of Psychology said: “We found that where for example one team wears white tops and red shorts and the other wears red tops and white shorts the search time for a fellow team player is affected.

“With crossed conditions also impairing the ability to discriminate two teams quickly and accurately, rules that prevent this from occurring may be beneficial in preventing misplaced passes, and incorrect refereeing decisions.”

The study cites examples including the 2017 English Football League Cup Final where Manchester United played Southampton in which the players were wearing crossed kits of red and white. A Southampton goal was controversially disallowed when the assistant referee had to make an offside call.

Liam Burnell added: “This could have implications for the laws of the game, with current guidelines only prompting a change in kit when the referee believes kits to make teams indistinguishable. There is currently no requirement for teams to wear different shorts colours, and guidelines remain pretty vague as to what constitutes a kit clash.”

The study also made some preliminary investigations into the role different strip colours have in player detectability when set against stadium backgrounds as they set out to explore whether Ferguson’s infamous claims that his players couldn’t see each other in their 1996 clash against Southampton could carry any truth.

Researchers also cited examples including comments from the then Wales manager, Chris Coleman, before a World Cup qualifier against Austria saying that no one wanted to play in grey as it was hard to distinguish players. Derek Adams in 2017, the then Plymouth Argyle manager also commented on their dark green strip at the time, reflecting on how they had changed the kit a little by bringing in white socks to help players because the strip blended in with the seating and the grass.

Study supervisor, Professor Peter Thompson from the Department of Psychology said: “These reports suggest that strips including those that are grey and dark coloured do not ‘pop-out’ from the  background, a problem which may be exacerbated when the team strip is close in colour to the stadium seating and particularly when playing in an empty stadium.”

The research was conducted using graphic images from video games and alternating kit colours which were then transposed onto different backgrounds. Participants’ response time in identifying the different teams was then monitored.

The paper, Finding Neymar: the role of colour in the detection and discrimination of football kits is published in the journal, Perception.