Graduated from University of Reading and studied for his Ph.D. at the University of Cambridge. He won a Harkness Fellowship from the Commonwealth Fund which enabled him to spend a period of post-doctoral study at the University of Pennsylvania. In 1990 he spent six months at N.A.S.A.'s Ames Research Center in California, funded by a Senior Research Associateship from the National Academy of Sciences. Teaches visual perception, research interest primarily in the perception of motion. Awarded a Vice-Chancellor's Teaching Award and a National Teaching Fellowship in 2006. Awarded the British Psychological Society's Award for Excellence in Psychology Education in 2012. Elected Fellow of the British Psychological Society, 2012.

Perception of motion and speed. My research recently has focussed on the mechanisms underlying adaptation to motion and recovery from adaptation. This is linked with research on the effects of contrast on perceived speed. This research has led to the development of a physiologically plausibe model of motion processing in the early stages of vision that relies on the ratio of fast and slow temporal mechanisms. That the tuning characteristics of the underlying mechanisms of the model have some characteristics of parvo- and magno-cellular pathways is interesting.

I am not, nor ever have been, involved in serious research into face perception.

Current research is in collaboration with Steve Hammett at Royal Holloway and Bedford College, funded by a Wellcome grant to Hammett and Thompson. Collaborating with Stuart Anstis of UCSD on aspects of the 'Footsteps Illusion'. Research collaboration with Michael Morgan at City University, funded by the Wellcome trust. Research project with Steve Hammett on visibility of cricket balls at low luminance and low contrast funded by the MCC. 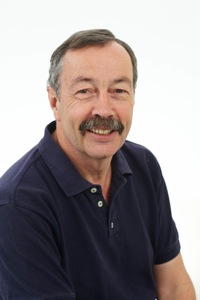