A scientist from the University of York has been recognised by the prestigious Blavatnik Family Foundation and New York Academy of Sciences for her pioneering work in fossil dating. 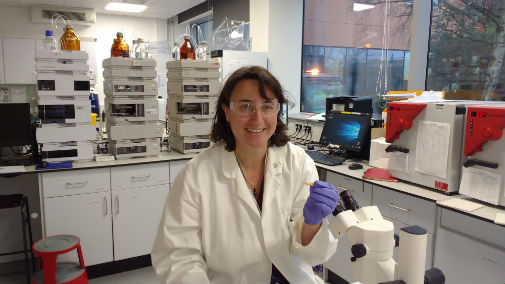 Dr Kirsty Penkman is the Foundation’s Chemistry Laureate this year and will receive an award of £75,000.

The Blavatnik Awards for Young Scientists recognise the pioneering work of academics under the age of 42.

Dr Penkman’s work has led to improvements in the accuracy of dating fossils from the last three million years,  leading to new insights into human evolution and climate change.

In each of the three categories—Life Sciences, Physical Sciences & Engineering and Chemistry— the winners were selected by a jury of leading scientists from across the UK. Six other finalists have also been recognised for their innovative discoveries.

Dr Penkman, from the University’s Department of Chemistry, said: “Having always loved chemistry, but also been fascinated by the past (both our human history and that of our Earth), I feel enormously lucky to be able to combine both in my work.

“My research focuses on the analysis of fossil biomolecules: their pathways of degradation, methods for their detection, and how these molecules can inform us of an organism’s life and death history.

“I am tremendously honoured by the Blavatnik award, and it is thanks to my wonderful colleagues and collaborators who have been integral to this research.  Working closely with earth scientists and archaeologists has helped push the analytical science forward, whilst advancing our understanding of our earth's history.”

Professor Deborah Smith, Pro-Vice-Chancellor for Research, said: “Dr Kirsty Penkman is an excellent scientist whose ground-breaking work has brought new insight into our understanding of how ancient events impacts on the world today.

“The award of this prestigious prize is richly deserved and will inspire others who follow in her pioneering footsteps.”

Professor Duncan Bruce, Head of the Department of Chemistry said: “I am absolutely delighted that Kirsty has been recognised in this way.

“Kirsty’s work shows the diversity of fields in which chemistry can make a real difference and it is fitting that her hard work, dedication and imagination have been judged worthy of this prestigious award.”

Sir Leonard Blavatnik, founder and Chairman of Access Industries and the Blavatnik Family Foundation and member of the President’s Council of the New York Academy of Sciences, said: "We are incredibly proud to elevate these select scientists to an international stage that will enable them to be recognised globally, prepare them to become world-class leaders in their scientific fields, and propel the wheel of innovation and societal progress."

Now in their third year, the 2020 Blavatnik Awards for Young Scientists in the UK received 80 nominations from 41 academic and research institutions across the UK. The UK awards sit alongside their global counterparts, the Blavatnik National Awards in the United States and the Blavatnik Awards in Israel, all of which honour and support exceptional early-career scientists at lecturer level and above.

The Blavatnik Family Foundation is an active supporter of world-renowned educational, scientific, cultural, and charitable institutions in the United States, the United Kingdom, Israel, and throughout the world. The Foundation is headed by Sir Leonard Blavatnik, a global industrialist and philanthropist and the founder and chairman of Access Industries, a privately-held industrial group based in the US with global strategic interests in natural resources and chemicals, media and telecommunications, real estate, venture capital/technology, entertainment, biotechnology, and selected external funds. See more at www.blavatnikfoundation.org.

The New York Academy of Sciences is an independent, not-for-profit organisation that since 1817 has been committed to advancing science, technology, and society worldwide. With more than 20,000 members in 100 countries around the world, the Academy is creating a global community of science for the benefit of humanity. The Academy's core mission is to advance scientific knowledge, positively impact the major global challenges of society with science-based solutions, and increase the number of scientifically informed individuals in society at large. Visit www.nyas.org.