The mental health benefits of virtual reality choir singing and games addressing phobias in young people are the focus of a new series of podcasts from the University of York. 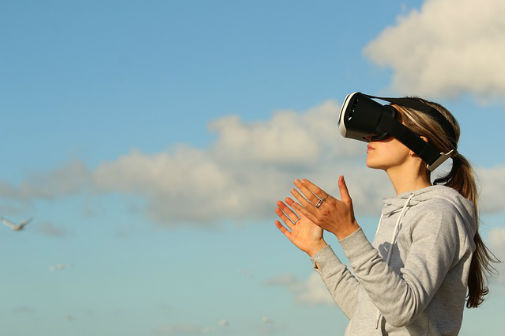 The fourth series of ‘The Story of Things’ podcast series will be launched at two live events, led by Dr Helena Daffern and Dr Lina Gega, at York Researchers' Night (YorNight) on Saturday, 17 November.

YorNight showcases the work of more than 50 University of York researchers, offering an opportunity for members of the public to find out about the diverse research being carried out in York.

Episode one of the new podcast series explores the work of researchers at the University’s Audio Laboratories, who, alongside partners in the Department of Music, National Trust, and Mouthful community choir, are investigating whether virtual reality choir-singing could have the same health and wellbeing benefits as they can in the real-world.

Dr Helena Daffern, from the University’s Department of Electronic Engineering, said: “We are particularly interested to learn about whether virtual reality can be as immersive and beneficial to people who have experienced group singing in real life, as well as to those who might never have had the opportunity. Could it improve their wellbeing and help overcome certain barriers?”

Episode two of the series addresses how games could be developed to provide new tools for tackling fear and anxiety in young people. The project, part of the Child Oriented Mental Health Intervention Centre at the University, has designed and built a prototype game that could potentially be used instead of, or alongside, more traditional modes of therapy.

Dr Lina Gega, from the University of York’s Department of Health Sciences, said: “There is a lot of discussion around the negative impacts of gaming on young people, but we believe it can be used as a positive tool for engagement on issues that really matter to children. We are currently focusing on phobias, but we want to expand this to other mental health issues for use in NHS services and schools.”

Dr Daffern and Dr Gega will present their projects at YorNight, alongside a variety of other research that members of the public can listen to and get involved with.

The podcast series is available on PodBean and can be downloaded from iTunes.

For more in The Story of Things podcast series visit: https://thestoryofthings.podbean.com/