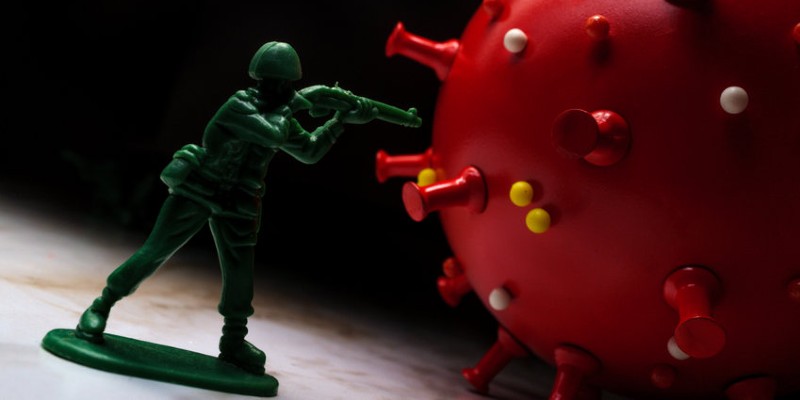 ‘Parallels with the Pandemic’: Living through Coronavirus and World War Two – similarities and differences

During the two years of the Coronavirus pandemic, many comparisons have been drawn between the experience of living through Covid and living through the Second World War. Fear, restrictions on liberty, concern over shortages and several other anxieties were hallmarks of both. Morale and people’s varying willingness to comply with regulations ebbed and flowed during wartime and during the pandemic. One characteristic of the pandemic has been the use of military language to describe the ‘battle against Covid’.

So what lessons if any can be drawn from the two experiences – war and pandemic – which may be useful for future crises?

Joining us to discuss these issues are Brooke Rogers OBE, Professor of Behavioural Science and Security in the Department of War Studies at King's College; Jo Fox, Professor of Modern History and Pro Vice Chancellor (Research and Engagement) and Dean, School of Advanced Study, University of London, and Franziska Kohlt, Researcher in Science Communication at the University of York. The event will be chaired by author Colin Philpott.

Professor Jo Fox is the Pro Vice Chancellor (Research and Engagement) and Dean, School of Advanced Study, University of London. She is a specialist in the history of propaganda and psychological warfare in twentieth-century Europe. She has published on propaganda in Britain and Germany during the First and Second World Wars, in particular exploring the connections between propaganda and popular opinion, and on mis-and disinformation in contemporary society. She is currently working on a four-year Leverhulme-funded project with James Smith (Durham) and Pat Waugh (Durham) on ‘The Political Warfare Executive, Covert Propaganda and British Culture’ and on an AHRC COVID-19 rapid response project on ‘COVID-19 rumours in historical context’. Jo is a regular commentator on historical and contemporary disinformation campaigns (‘fake news’). Prior to her current role, she was the first female Director of the Institute of Historical Research, first female Professor of Modern History and first female Head of Department at Durham University, where she began her academic career in 1999. She has previously served as the Honorary Communications Director of the Royal Historical Society. She is a National Teaching Fellow (2007), a Fellow of the Royal Historical Society (FRHistS), and a Fellow of the Royal Society for Manufactures and the Arts (FRSA). She currently serves as panel Chair for early career research awards in humanities at the Wellcome Trust.

Dr Franziska Kohlt is a researcher in Science Communication, the History of Science, and Literature at the University of York, and an active science communicator with an interest in the socio-psychological history of what narratives make science communication effective - and what doesn't. She has worked with the Royal Entomological Society, schools and museums, and appeared on national and international media to speak about the role of literature and narratives shaping public understandings of science. She is the author of Alice Through the Wonderglass: the Unexpected Histories of a Children's Classic (forthcoming with Reaktion, Fall 2022), that illuminates the origins of Alice in Wonderland in Victorian science literature for children. She is a former translator for Marvel comics, and has published on a wide range of topics, from Fantastic Literature, Science and the history of psychology, to automata and insects.

Colin Philpott is the author of three books about twentieth-century history. Secret Wartime Britain, published in 2018, investigates hidden places in Second World War Britain which contributed to the war effort and examines how secret they really were. Relics of the Reich, published in 2016, tells the story of the architecture left by the Nazis and how modern Germany has dealt with this difficult legacy. A Place in History, published in 2012, highlights around a hundred places all over Britain which were the locations of news events and looks at the impact of those events on the places in question.  Previously, Colin was Director of the National Media Museum in Bradford, and before that a BBC programme maker and journalist for 25 years working on news, current affairs and documentaries, including a spell of eight years as Head of BBC Yorkshire.