Your time at York

Three-year degree programmes consist of modules totalling 360 credits, with 120 credits taken each year. Most modules count for 20 credits, so you normally take six modules a year.

In four-year degree programmes, your work while abroad is assessed and the marks achieved contribute towards your final degree classification.

In the second year, there are a smaller number of fixed modules (depending on your degree), with all students taking a module in one further foundational core area of linguistics, the study of language acquisition.

The greatest degree of choice is available in the final year, though if you are studying French, German or Spanish, there are final year compulsory modules (including Translation Methodology and Practice).

Full details of the choices available at each stage in each of our degrees is listed under ‘Courses’. 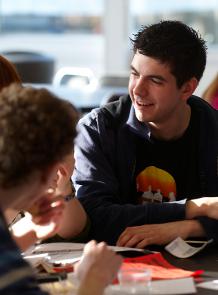 If you are on a three year degree programme you have the option to apply - through a competitive exchange programme - for a place to study abroad in your second year, in North America, Australia or Asia:

If you are on a four year degree programme, you can choose to spend your year abroad either at a university, on a work placement or as an English language assistant in a school abroad.