The City of York 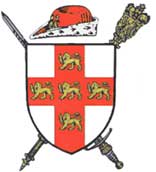 The University of York is situated in one the most beautiful cities in Europe (voted European Tourism City of the Year in 2007). Midway between the capital cities of London and Edinburgh, and with excellent transport links, the city has a 2000 year history, and a modern outlook with the Science City York project encouraging high-technology industry, including the University spin-out companies housed at our Science Park. In the last ten years, over 80 technology companies have started or moved here, creating over 2,500 new jobs.

York is situated in the north of England and is the ancient capital of this part of the island of Great Britain. It lies at the confluence of the River Ouse and the River Foss, in the centre of a large plain known as the Vale of York. It is surrounded by areas of outstanding natural beauty, including the North York Coastline, and the Yorkshire Dales and the North York Moors National Parks. London is less than two hours away by train. 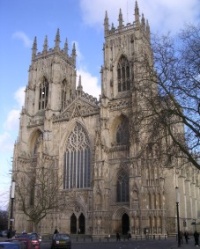 The city (then named Eboracum) was founded by the Romans at the confluence of the Rivers Ouse and Foss, a naturally defensible position. It has always been an important centre: it was one of the capitals of Roman Britain, and for a short period the entire Roman Empire was governed from York. In the ninth century CE, the city (then called Jorvik) was made the capital of most of northern England by the Vikings, and remainded so for most of the next eight hundred years.

Amongst the unique features of our city are the well-preserved medieval walls, the unique Jorvik centre, and York Minster, one of the great cathedrals of Europe, and the largest Gothic building in Europe north of the Alps. Particularly famed for its stained glass windows, it also boasts what is possibly the oldest police force in the world. Also, uniquely for a building completed in 1472, it contains a roof boss designed to commemorate the 1969 landing of the astronauts on the moon: one of a number of features inspired by modern events to replace older bosses destroyed by fire in 1984. It is a peaceful place, open to all, and the building and its gardens provide a quiet haven in a busy city centre.

Largely untouched by the industrial revolution, the centre of York today retains many period buildings, cobbled streets and pedestrian-only areas, lined with cafes and speciality shops. Tourism is now a major industry, and York is now the second most-visited city in England (after London).

The city is also home to two world-famous museums: the Castle Museum and the National Railway Museum (the largest museum in the world dedicated to railways). 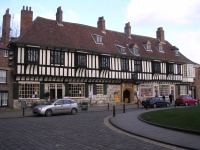 The University is home to the oldest legal independent radio station in the United Kingom, University Radio York, using some equipment maintained and built by electronics students.

Amongst the theatres in the city are the Joseph Rowntree theatre, the Grand Opera House, and the Theatre Royal, home to the annual Theatre Royal Pantomime - a unique theatrical event not to be missed if you're in York over the winter.