Many women felt compelled to break lockdown laws, which banned meeting friends and family at home, due to caring responsibilities, a major new report has found. 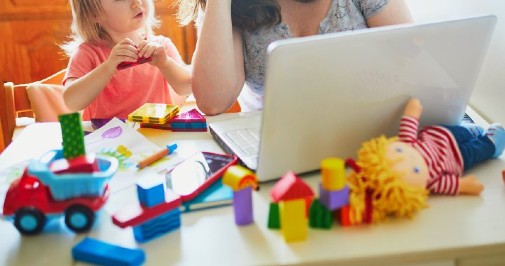 The report, by the University of York and funded by the Nuffield Foundation, found that women were nearly twice as likely than men to break laws prohibiting meeting with others indoors.

The findings highlight how many of the laws imposed during the pandemic clashed with existing gender inequalities, with women bearing the brunt of trying to balance childcare with work commitments, the authors of the report say.

Lead author of the study, Professor Joe Tomlinson from the Law School at the University of York, said: “The results of our study suggest there wasn’t enough consideration given to caring obligations and how the new laws would have a disproportionate impact on women and other groups facing inequalities.

“Our findings surprised us because previous studies into compliance have shown that men are much more likely to break the law than women. However, our results are not about women being willfully non-compliant. Many participants told us how they broke the law by enlisting grandparents to help with childcare or meeting with other mothers for support. They were forming ‘bubbles’ out of necessity before it was officially allowed.”

For the study the researchers carried out surveys, interviews and focus groups with nearly 1,700 participants from across the country in order to investigate how the public responded to lockdown restrictions imposed during the extraordinary events of spring 2020 and what they believed to be legal rules.

They found that the main drivers of compliance were fear of peer disapproval; the conviction that breaking lockdown rules was morally wrong; and a general commitment to being law abiding.

While the public were generally willing to comply with restrictions, the researchers say their report records how an increasing amount of rule bending and what they have dubbed “creative non compliance” took place as time went on.

This involved lawbreakers justifying breaches by claiming they had adhered to the “spirit” of a rule. For example, one participant explained why they had broken the rules to visit a friend at home by saying: “So, whilst we knew it was against the rules at the time, we also knew that it wasn’t not sensible and safe. So it was conflicting, but we felt comfortable the whole time …”.

The researchers found that participants had radically different understandings of what was law and what was guidance issued by the government and that this greatly influenced their willingness to comply.

They discovered, for example, that more than 80% of people believed that the “two metre rule” was a legal requirement, when in fact it had only been guidance.

Professor Tomlinson added: “We found that many people believed that legal requirements over the course of the pandemic were more onerous than they were in reality. This confusion may have increased compliance with many of the guidelines, but misleading the public in this way runs the risk of undermining the legitimacy of law.

“Overall our study shows that as a nation, the British people are very willing to follow the rules of the legal system, but it’s dangerous for governments to abuse that or take it for granted.

“The power of law in generating compliance is something policy makers should bear in mind for future public health responses as our study highlights a deep psychological difference.”

Rob Street, Director of Justice at the Nuffield Foundation said: “During the COVID-19 crisis there was lots of discussion about why people did or did not comply with lockdown rules. This study illustrates how people’s willingness to comply with lockdown rules was markedly influenced by whether these rules were based in law or guidance and how they were communicated to the public. These important insights offer key lessons to policy makers when they are seeking to secure public compliance for new rules.”