Chimpanzees use a “hunting bark” to recruit group members to a hunt and capture their prey more effectively, new research has shown. 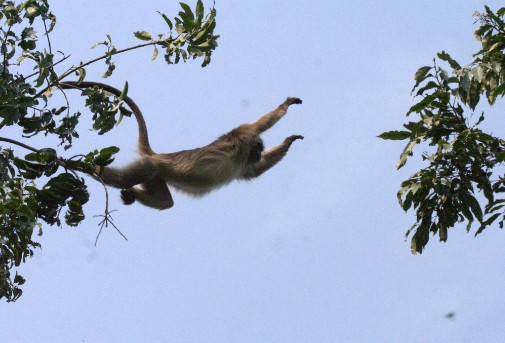 The study, by an international team including a researcher from the University of York, found that the specific vocalisation is key to recruiting group members to join the pursuit of fast-moving prey, such as monkeys in the canopy.

The researchers analysed more than 300 hunting events recorded over the last 25 years at the Kanyawara chimpanzee community in Uganda. They found that chimpanzees using the “hunting bark” were able to rally more group members, begin a chase quicker and capture their prey in a shorter time.

Co-author of the study, Professor Katie Slocombe from the Department of Psychology at the University of York said: “Humans use language to coordinate complex acts of cooperation. Animals can also cooperate in amazing ways, but it’s often very difficult for us to discover how they are coordinating their actions. This study shows for the first time that our closest living relatives also use vocal communication to cooperate more effectively during group hunting.”

Chimpanzees mainly forage for fruit, but from time to time they also seek out opportunities to acquire protein-rich meat. Hunting monkeys as a group in dense tropical rainforest where it is hard to monitor the actions of others can be challenging.

Lead author of the study, PhD student Joseph Mine from the University of Zurich, said: “Chimps who produce hunting barks provide information to those nearby about their motivation to hunt, and this information may persuade reluctant individuals to join, boosting the overall chances of success.”

The researchers considered a wide array of other factors that may affect the outcome of a hunt, including the presence of skilled hunters as well as potential distractions, but the occurrence of hunting barks retained a key role.

It is widely accepted that communication and cooperation are tightly linked and co-evolved in humans. Over time, as one became more complex, so did the other, generating a feedback cycle which ultimately led to language and the uniquely complex forms of cooperation modern humans engage in.

However, until now it has been unknown how far back into humans’ evolutionary past this relationship between group cooperation and communication can be traced.

Joseph Mine added: “Our results indicate that the relationship between vocal communication and group-level cooperation is ancient. This link seems to have been in place for at least 7 million years, since our last common ancestor with chimpanzees.”