Researchers are calling for greater protection for whale sharks after new data revealed the world’s largest fish are increasingly being injured as a result of tourism-related activity. 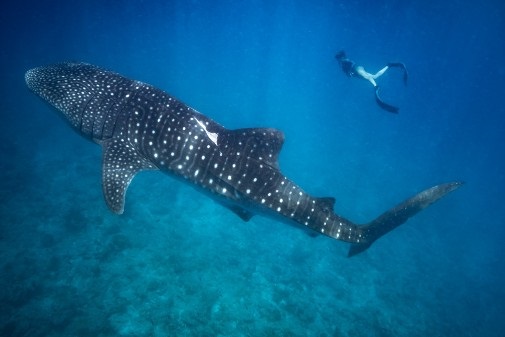 Injured whale sharks that linger in one place for longer than normal are in danger of further injury. Credit: Lewis Jeffries

The team, which includes researchers at the University of York and the Maldives Whale Shark Research Programme (MWSRP), found that injured whale sharks linger longer in these ‘hotspots’, which potentially means they miss out on seasonal food sources in other areas, as well as putting themselves at greater risk of further injury from human activities

In 2018, the same research team revealed why whale sharks gather en masse at just a handful of locations around the world.  Large groups gather at around 20 locations off the coasts of countries including Australia, Belize, the Maldives and Mexico, and research showed that this was due to the warm, shallow water in close proximity to a sharp sea-floor drop off into deep water.

These locations, whilst offering the perfect conditions for the whale sharks, are popular tourist destinations. Sharks swimming in shallow waters close to the surface are vulnerable to boat strikes – both large ships and tourist boats – resulting in injury or even death.

Dr Bryce Stewart, from the University of York’s Department of Environment and Geography, said: “Since investigating why whale sharks only gather at a few sites, we have found that loyalty to these areas seems to be high even in injured sharks, despite the risk of re-injury from boating activity.

“The impact of injury on where and how long these creatures stay in one spot was not fully understood, however, so we needed to investigate how behaviour differed between injured and non-injured whale sharks.”

The team found that approximately 80% of the whale shark residents that could be assessed for injury at the South Ari Atoll aggregation site in the Maldives had sustained at least one injury.  There was also no difference in the use of the sites – both injured and non-injured whale sharks took residency in the same area – but there was a difference in how long they stayed in the same place.

Harriet Allen, who led the study as part her postgraduate study at the University of York's Department of Environment and Geography, said: “These sites provide the ideal environment for whale sharks to search for food in both deep water and warm shallows, as well as bask in the surface water to warm up their large bodies.

“Unfortunately, they also pose a huge risk because of the human activity in the area, which means that almost all of the resident whale sharks are injured at some point in their lives.

“Our new data suggests that the injured sharks remain longer in these areas potentially because they provide the resources the sharks need in order to recover - the benefit gained from this area is greater than the risk of staying.

“However, we now need to establish whether injury causes the longer residency or whether it is more a case that the more faithful the whale shark is to the area, the more likely they are to get injured.  More work is needed on the aspect of ‘loyalty’ that these fascinating creatures seem to have to these select areas.”

The researchers highlight that the longer these injured sharks remain in a vulnerable state at these sites, the higher the risk of further injury, which means that more management of these areas is needed in order to balance the need for tourism with the protection of these endangered species.

Richard Rees, Managing Director of the Maldives Whale Shark Research Programme, said: “Much of the tourism to this area has been severely impacted by the coronavirus pandemic, and whilst this has been a big challenge for local business, it is also the ideal opportunity to take a pause and examine what is important for the sites going forward to allow businesses to get back on their feet and the unique wildlife to thrive at the same time.

“This new research demonstrates the urgent need for effective enforcement of and compliance with an area management process that allows the continued survival of these magnificent creatures.”

The research is published in the journal Aquatic Conservation: Marine and Freshwater Ecosystems.