Films shine a spotlight on discrimination in the screen industries

The University of York has collaborated with a Bafta-nominated TV company to produce a series of films highlighting discrimination within the screen industries. 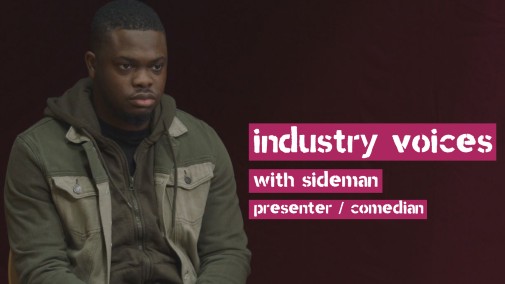 Sideman, a former BBC radio DJ and one of the participants

Research shows that to varying degrees across the screen sectors, discrimination against many groups including black, Asian and minority ethnic people, women, disabled people, LGBTQ+ and people from lower socio-economic backgrounds means that many individuals are disadvantaged or held back in their careers.

Now, the Screen Industries Growth Network (SIGN), based at the University of York, has collaborated with Leeds-based Candour TV to shine a spotlight on that discrimination to produce the Industry Voices series.

In each film, a screen industry professional tells their own story. These individuals have experienced discrimination or lack of opportunity based on prejudice towards their race, ethnicity, gender, disability, sexual orientation, class, background, regionality or a combination of these things.

They tell their own stories in their own words, and share how these experiences have impacted their career and life, and how they choose to move forward.

Sideman, a former BBC radio DJ and one of the participants said: “I feel like I’d be way further along in my career right now if I had a London accent...In terms of race, I’ve just felt like that has determined what I’m picked for, what I’m seen as and how I’m viewed.”

Andrew Higson, Director of SIGN and the Greg Dyke Professor of Film and Television at the University of York, said: “The issues raised by participants such as Sideman highlight entrenched discrimination within the screen industries. Whilst these issues are not new, progress to tackle them and effect real change has been slow. At SIGN we aim to champion the cause of diversity and inclusion within the sector and will launch a raft of initiatives in the coming months to help support and encourage change.”

Dr Beth Johnson (University of Leeds), Diversity and Inclusion lead for SIGN and the creator and SIGN executive producer for Industry Voices series, said the industry acknowledges that change is needed, yet so many of the sector’s diversity-focused programmes, strategies and schemes have failed to make an impact.

She says to support meaningful change, there is a need to first actively listen to the intersectional lived experiences of those who are discriminated against.

SIGN is a unique, business-facing initiative supporting the TV, film and games industries in Yorkshire and the Humber. SIGN aims to make this region the UK’s centre for digital creativity, and a model of diverse and inclusive activity. In order to do this, SIGN connects companies, support agencies and universities through a programme of training, business development, research and evaluation.

SIGN is a £6.4M project, which began in Summer 2020. It’s funded by Research England, the University of York, and its partners. The University of York leads the initiative, working with Screen Yorkshire and eight other Yorkshire universities. An extensive network of collaboration ensures that SIGN is equipped to deliver maximum impact across the region.

Anna Hall, Director and Executive Producer, at Candour said: “2020 was a year of lightbulb moments for the industry - from supporting freelancers in lockdown with financial and mental health issues; to the effect of George Floyd’s death; to the wake up call of tackling systemic bullying within the industry. It’s  time for us all to stand up and face the demons in the collective closets of the wider TV, Film and Game Industry.

“At Candour for the last six years we have been supporting women to stay in the industry, particularly as they become mums and progress up the production ladder - and we are delighted to have produced these films to keep the conversation going. We want to thank each of our contributors who have been brave enough to take part and speak out.”

Candour is a multi-award winning, female led 6X BAFTA nominated production company based in Leeds. Our passion is to make films that do make a difference - and to create a truly flexible and supportive working environment for our staff.