Researchers at the University of York have shown that wearing Health and Safety Executive (HSE) rated ultra-grip shoes could reduce injury to NHS staff if they were to be made a recommended part of the uniform. 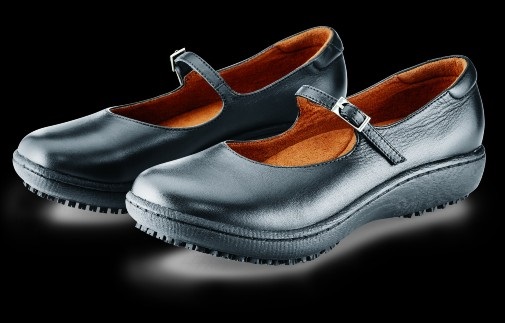 Slips and falls are one of the main causes of injury in the workplace, accounting for more than 100,000 injuries in Britain in one year, and resulting in nearly one million days taken off work.  The health and social care sector has the highest cases, partly due to smooth floors that can become frequently wet or dirty.

The study, conducted by the York Trials Unit at the University of York in collaboration with the Health and Safety Executive, Leeds Teaching Hospital NHS Trust and the University of Leeds, involved seven NHS Trusts, where 50 per cent of staff who volunteered to take part were asked to wear their own choice of shoes to work and the other half were provided with shoes with the HSE’s highest grip rating of 5* for a period of 14 weeks.

Professor David Torgerson, Director of the York Trials Unit at the University of York, said: “The NHS, and particularly in the current climate, cannot afford staff to be off work due to injuries that could have been easily avoided.

“Staff should be encouraged to wear appropriate footwear for the variety of surfaces that NHS workers encounter.  We must be clear, however, that not all shoes that claim to be slip resistant will be effective on these smooth surfaces, but shoes with this highest HSE grip rating does give the assurance that compared to the average shoe, it will prevent a higher number of slips and falls.”

Researchers noted that seven of the NHS Trusts involved in the trial stated in their staff policies that footwear should be sensible, low-heeled, and not open-toed.  Only four trusts stipulated that staff should wear non-slip footwear, but none of them, however, mentioned any specific requirements, such as a HSE rating.

Heather Iles-Smith, a collaborator whilst working at Leeds Teaching Hospitals, now Professor of Nursing, Northern Care Alliance NHS Group, University of Salford, said: “Many NHS staff are on their feet all day, so it is important they are comfortable as well as safe in their footwear. Staff were, on the whole, positive about the look and feel of the footwear used in the study, so they are likely to welcome the added assurance that this footwear is suitable for their working environment and improves their safety.”

The researchers say that the findings can also be applied to other industries that have slippery hard floors such as canteens and kitchens.

Professor Andrew Curran, HSE Chief Scientific Adviser and Director of Research, said: “The findings show how appropriately specified footwear can be a cost-effective way to reduce slips and provides evidence to support their use in workplaces where it is not reasonably practicable to prevent floor surfaces becoming slippery.”

The trial was funded by the National Institute for Health Research (NIHR) and the Health and Safety Executive (HSE). The paper is published in the BMJ’s journal for Occupational and Environmental Medicine.