Could wider use of gene reserves protect rare species?

UK landowners and conservationists welcome wider-spread use of Gene Conservation Units (GCUs) to help protect some of the rarest plants and insects, research at the University of York has shown. 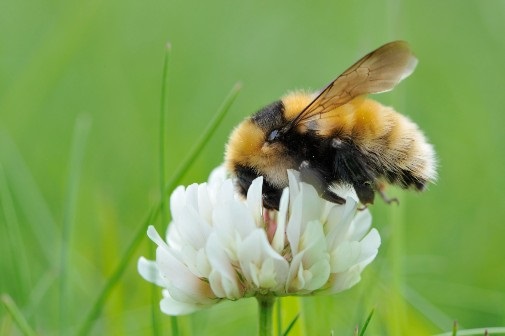 In particular the Great Yellow Bumblebee and the Mountain Ringlet Butterfly, which are at risk of further population decline, would benefit from the Units, currently only employed for forest trees.

Genetic diversity in these species is essential if they are to adapt to new, and often challenging, environmental conditions. Gene Conservation Units are areas of land managed to allow the recovery of species, and maintain evolutionary processes to enable them to adapt to environmental change.

For tree species, this means promoting natural regeneration, and for others, it means ensuring that the breeding population is large enough, and diverse enough, to be able to weather the changes ahead. Habitat management may achieve this, as well as population monitoring to ensure a large population is sustained.

PhD researcher Melissa Minter, from the Department of Biology at the University of York, said: “In investigating whether landowners would be interested in adopting a system of GCUs, we looked at the potential benefits these might bring to some species of insects and plants.

“We have shown that the genetic diversity of cold-adapted butterflies, such as the Mountain Ringlet, is at high risk of local extinction in a warming climate and so conservation measures are needed to secure the survival of threatened populations.

“Similarly, the Great Yellow Bumblebee now only survives on a few Scottish islands and the northern tip of mainland Scotland, which means that any changes in our climate could negatively impact their already depleted population.

“We wanted to know if GCUs could provide a solution to some of these issues and whether this concept could be applied to other species, in addition to forest trees.”

The research involved a survey questionnaire of conservationists and land managers to gather opinions on adopting a system of GCUs to protect biodiversity. The survey results showed that if GCUs could be co-developed with stakeholders, then a GCU approach is more likely to appeal to land managers.

Specifically, landowners would benefit from setting-up GCUs on their land as recognition of best practice in conserving species and genetic diversity, and supporting evolutionary processes to help species cope with environmental change. A working group has now been established to look at how the first non-tree GCU could be developed.

NatureScot’s Beinn Eighe National Nature Reserve (NNR) was registered as the UK’s first GCU in recognition of its ancient Caledonian pine forest in 2019. Since then, the Woodland Trust have registered several more sites across the UK, including three more in Scotland, for six tree species.

NatureScot Woodlands Officer and research co-author Jeanette Hall said: “We have seen first-hand how successful the Gene Conservation Unit approach can be with the registration of our Beinn Eighe NNR and this research shows the exciting potential for working with land managers to expand this work to cover many more plant, animals and wild species.

“Conserving genetic diversity remains an international biodiversity priority so in what will be an important year for nature and tackling climate change, it’s great to see partnership working across the UK leading the way in this field.”

Genetic diversity was the focus of one of the international Aichi 2020 biodiversity targets. This year new global targets to improve nature will be agreed at a Conference of the Parties in Kunming, China (COP15), followed by the COP26 on climate change in Glasgow.

The research team is now looking at establishing two GCUs in Scotland and will monitor the success of GCUs in supporting at-risk species.

Could online ‘games’ be answer to challenge of teacher recruitment?

The study, published in Ecological Solutions and Evidence, is supported by NatureScot, the Natural Environment Research Council (NERC), University of York, Forest Research, and the University of Edinburgh.