African rainforests appear more resistant to some additional warming and drought compared to rainforests in Amazonia and Borneo, a new study has concluded. 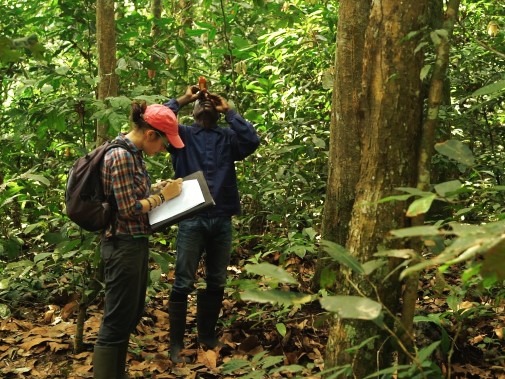 During 2015-2016 African rainforests experienced warming of 0.92 degrees Celsius above the 1980-2010 average, and the strongest drought on record in the continent, both driven by the El Niño conditions on top of ongoing climate change.

In spite of that, the international study – involving researchers from the University of York –found that intact forests across the continent still removed 1.1 billion tonnes of carbon dioxide per year from the atmosphere during the El Niño monitoring period. This rate is equivalent to three times the carbon dioxide emissions of the UK in 2019.

Dr Aida Cuni-Sanchez, from the Department of Environment and Geography, spent four months sampling tree growth and death in the remote rainforests of Ndoubale-Ndoki National Park, in northern Congo.

Dr Cuni-Sanchez said: “Measuring trees in remote rainforests is not easy. We travelled by boat, car, canoe, and we walked for days, crossing rivers and swamps, to reach the locations where trees are tagged and are being used for forest monitoring.

“I was very excited to discover that we did not find a sharp increase in tree death as a result of the 2015-2016 El Niño, which is different to what was observed in tropical forests in other continents before.”

African rainforests exist in relatively dry conditions compared to those across much of Amazonia and Southeast Asia. The researchers wanted to establish whether this made them particularly vulnerable to extreme climatic conditions, or if the abundance of drought-adapted tree species occurring in African forests meant that they were less vulnerable to additional warmth and drought.

Lead author, Dr Amy Bennett from the University of Leeds said: “African tropical forests play an important role in the global carbon cycle, absorbing 1.7 billion tonnes of carbon dioxide from the atmosphere each year in the 2000s.

“To discover that they will be able to tolerate the predicted warmer and drier conditions of the near future is an unusual source of optimism in climate change science.

“Our results provide a further incentive to keep global temperature increases to 1.5 degrees Celsius, as outlined in the Paris Agreement, as these forests look to be able to withstand limited increases in temperature and drought.”

The research is published by the journal,  Proceedings of the National Academy of Sciences