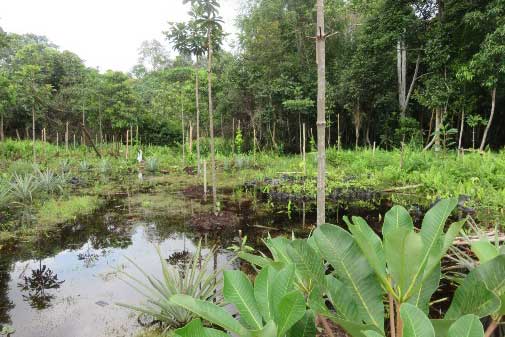 Indonesia's peatlands are a crucial habitat for many birds and animals, including endangered species such as orang-utans and tigers. Image credit: Caroline Ward, University of York.

Unspoilt peatlands act as a carbon sink and play an important role in reducing global carbon emissions. They are also a crucial habitat for many birds and animals, including endangered species such as orang-utans and tigers.

Draining peatland for farming destroys habitats and causes the peat to emit the carbon it once stored. The dry land also becomes prone to fire – leading to increased carbon emissions and a threat to the lives of many species including humans.

The study, led by researchers at the University of York, interviewed people involved in work to conserve and restore Indonesia’s 15 million hectares of peatland – more than half of which has been drained and converted to cropland.

The international team, which included researchers from Jambi University and the Indonesia Soil Research Institute, gained the views of scientists, charities, and government officials. All participants agreed that getting support from local communities and raising water levels were key to successful restoration.

Lead author of the study, Dr Caroline Ward from the Leverhulme Centre for Anthropocene Biodiversity at the University of York, said: “While many peatlands in Indonesia have been drained for large palm oil plantations, many hectares have also been drained for local smallholders and farmers to grow crops on.

“Many of these local people have no other option but to use the land in this way. Efforts need to be made across all stakeholders involved in peatland restoration to provide people with an alternative source of income or a crop which can be farmed in a more sustainable way.”

Restoring drained peatland involves a process of “rewetting” where canals draining water away are blocked or filled in.

Professor Lindsay Stringer from the University of Leeds commented that “rewetting brings the water table closer to the surface, so this makes it less likely that the peatlands will catch fire.  Rewetting is often used together with revegetation and revitalisation to improve the overall peatland condition”.

Professor Jane Hill, project leader at the University of York, commented that “restoration of peatlands to prevent fires has huge benefits for local communities and preventing forest fires is vital for conserving wildlife”.

“Our study highlights that while everyone agrees that restoration of peatland is crucial, there is no consensus on how this should be achieved and how much progress has been made to date.

“We need to gather an evidence base urgently, and establish better ways of collaborating and sharing information between different groups.”

Wading through the swamp: what does tropical peatland restoration mean to national level stakeholders in Indonesia? Is published in Restoration Ecology.

The research was carried out in collaboration with the Indonesia Center for Agricultural Land Resources Research and Development, Jambi University (Indonesia), the Universities of Liverpool, Oxford and Leeds and the Zoological Society of London. The research was funded by UKRI/NERC and DIPI (Indonesia) through the Newton Fund UK – South-East Asia Research Partnerships Call.