Sharks are virtually absent from many of the world's coral reefs, according to a major new study involving the University of York. 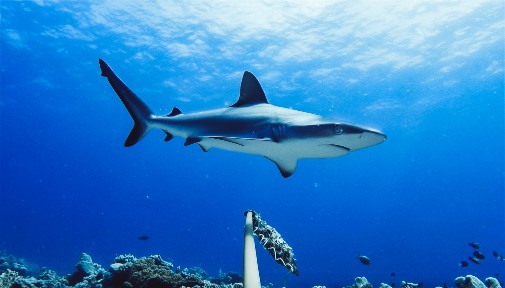 In what is the largest global survey to date, scientists spent four years recording sightings of reef sharks and rays on 371 reefs across 58 countries.

The research team did not find sharks on 20 per cent of reefs surveyed.

The study concluded that the dramatic dive in numbers, caused by overfishing could have grave implications for coral reefs that are already struggling to survive climate change.

In order to carry out the research, underwater cameras were fitted to reefs in tropical oceans from the Central Pacific to the Bahamas.  Any sharks nearby were then attracted to the camera by bait hanging on a pole in front of the lens.

PhD student and research scientist, Kennedy Osuka Edeye from the Department of Environment and Geography and CORDIO East Africa worked off the coast of East Africa deploying underwater cameras on reefs in the Indian Ocean as part of the study.

Kennedy said: “Our research indicates a widespread decline that has largely gone undocumented until this global survey. Sharks are absent on many of the world’s coral reefs, indicating they are too rare to fulfill their normal role in the ecosystem, and have become ‘functionally extinct’.

“Sharks are top predators, playing a key role in marine ecosystems. In the survey they tended to do their best in areas where shark fishing was controlled, or where marine sanctuaries had been created.”

It’s estimated that 100 million sharks are killed by people each year, many for their meat and fins but some are killed unintentionally trapped in fishing nets.

In the study there were almost no sharks observed on any of the 69 reefs of the Dominican Republic, the French West Indies, Kenya, Vietnam, the Windward Dutch Antilles and Qatar.

Researchers hope the data can be used to inform long-term conservation plans for protecting remaining reef sharks. They also said that better regulated fishing would give shark populations a chance to recover.

Lead author, Dr Aaron MacNeil of Dalhousie University, Canada, said, "From restricting certain gear types and setting catch limits, to national-scale bans on catches and trade - we now have a clear picture of what can be done to limit catches of reef sharks throughout the tropics."

The research is published in the journal, Nature and is and part of the Global FinPrint study.