The festive period is traditionally a time to overindulge and so it’s easy to forget about staying sustainable. With some help from our leading environment and sustainability experts at the University of York, here’s 12 tips for a Christmas that will ease the burden on the planet without taking away the festive fun. 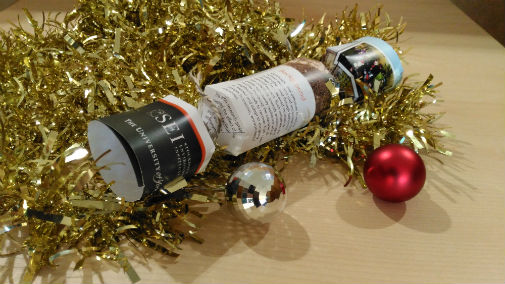 Clean air in the kitchen…to roast or not to roast ?

Many of us spend a lot of time indoors at Christmas cooking, eating and drinking with friends and family. Clean air in our own homes is important, but a recent study showed that fine particle concentrations reached levels higher than those in central London during the preparation of a Sunday roast.

Nicola Carslaw from the Department of Environment and Geography says: "For most people turkey, roast potatoes, parsnips and sprouts are at the heart of a Christmas meal. However, we know that cooking meat and vegetables at high temperatures combined with hot oils particularly with a gas stove, can produce tiny particles that can be inhaled into the lungs and bloodstream and cause respiratory and cardiovascular problems. This issue is easily rectified with ventilation: so open a window at peak cooking time and use an extractor hood that vents outdoors."

It is estimated that more than 40 million Christmas crackers end up in the bin on Christmas Day, most of the shiny paper and plastic toys going into landfill.  There is a growing campaign calling for the banning of this festive frippery, first invented by the British.  Annemarieke de Bruin, Research Associate at the Stockholm Environment Institute (SEI), University of York has an alternative suggestion:

She says:” We made our own crackers this year using recycled paper and useful gifts.  You can even have a go at writing your own jokes. They’re fun to make and get everyone in the festive spirit without creating loads of landfill waste.”

No waste in the first place... try a recycled Secret Santa

She says: “Instead of buying something new, why not dig out an unwanted gift you have at home or something you are happy to give away that you could pool into your Secret Santa giving."

“And while you are at it, consider your Christmas present wrapping. It is estimated that the UK generates around five million tonnes of plastic waste each year, with around half being used for packaging. Whilst recycling rates for the UK are improving, local authorities have been affected by a number of key issues, including, for example, China recently banning the imports of certain types of plastics, thus forcing them to find alternative routes to process our waste. Keep an eye out for what wrapping paper is recyclable or use alternative wrappings, such as newspaper or old fabric.”

Wine sales rocket at Christmas as people enjoy more of their usual tipple, together with some seasonal mulled wine and celebratory fizz. A recent study showed there is 25 per cent more household waste over Christmas in the UK, so would a switch from bottle to boxed wine help reduce the carbon footprint of our household waste?

Victoria Wells, Professor of Sustainable and Ethical Management at the York Management School says it’s a dilemma: “The wine bottle versus wine box is really hard as there are a lot of caveats.  Wine boxes sometimes contain plastic and other linings so that can make them hard to recycle. Wine bottles can be recycled but it’s the supply lines that affect their sustainability. As a high value product they can often be transported by air meaning lots of air/food miles. You could try drinking local wines if there are any where you live. It’s a difficult choice as there’s a high chance your favourite bottle doesn’t come from round the corner!”

Wrapped in plastic? Not so fantastic…

It’s estimated that 25,000 tonnes of plastic will be produced this Christmas just through the packaging of toys. Dr Karen Parkhill, from the Department of Environment and Geography offers some alternatives:

“Instead of buying a thing that your child will quickly grow out of, you instead buy an experience that will perhaps stay with them forever? If that doesn’t appeal then consider leaving the plastic packaging at your retailer to send a clear message that we should be reducing plastic waste produced in the first place.

“Many of us will be participating in Secret Santas, with the majority of the gifts given likely to be gags. I'm not against fun (I promise!), but consider giving a more useful gift like a plastic-free alternative. For example, a reusable non-plastic travel mug to help reduce the 2.5 billion disposable cups we use every year in the UK (that's around 7 million disposable cups every single day).

“We will be using a lot of wrapping paper this Christmas, in fact it is estimated the UK uses 227,000 miles of wrapping paper each year. While most of this will be put into the recycling bin, increasingly, local authorities are rejecting whole loads that have been contaminated with glitter, so please consider switching to glitter free wrapping paper and Christmas cards.”

Candles feature in many people’s Christmas inducing the Danish feeling of “Hygge” permeating wellbeing and warmth. But scientists have discovered that burning candles indoors may have a darker side.

Nicola Carslaw from the Department of Environment and Geography says: “Recent studies have shown that burning candles indoors may lead to the production of high concentrations of fine particles indoors, particularly in poorly ventilated areas. One alternative is electronic tea-lights, which are now being recommended in Denmark. The Danes burn more candles than anywhere else in the world.”

“However, not everyone likes these ‘fake’ candles and in terms of sustainability, the issue of having to use batteries then arises. It is however becoming possible to buy re-chargeable tea lights.”

About half of all packaged supermarket products, including biscuits and cakes, contain palm oil, but there are concerns that palm oil plantations are resulting in the loss of tropical rainforest, and the animals, plants and carbon stocks which these forests contain. So how can you enjoy your Christmas treats without harming the rainforest?

Professor Jane Hill from the Department of Biology says: "Buying products that contain sustainable palm oil is vital. Palm oil is an amazing crop that produces far more fat and oil than an equivalent area of land of an alternative oil crop such as coconut, sunflower or oilseed rape. Avoiding oil palm is not the answer because it could result in even more land being converted to agriculture, so if you want to eat cakes and biscuits with a clear conscience – look for brands and supermarkets that have commitments to sourcing sustainable palm oil.”

Victoria Wells, Professor of Sustainable and Ethical Management at the York Management School considers what can be done during the festive season to reduce food waste:

“Planning is important- make a list, consider portion sizes and don't over buy. Also think about buying locally to avoid food miles and to support local businesses - not always to do with food waste but an added benefit of considering shopping practices. Also while the 3 for 2 and buy one get one free offers may seem attractive when you're standing in the supermarket, if you're not going to use that extra bag of potatoes or sprouts don't buy them. Also think about what you're going to do with leftovers. It doesn't have to be turkey curry - there are plenty of tasty leftover recipes around.”

When it’s cold outside…

Many people celebrate Christmas with a real log fire that is often used but once a year. Professor Alastair Lewis from the National Centre for Atmospheric Science, University of York suggests leaving the matches in the box:

He says: “Everyone likes the idea of a crackling log fire at Christmas, and they’re a staple of Christmas cards and TV adverts. But if you light one, you’ll be contributing in a major way to both air pollution in your home and to your neighbours outside. One domestic wood burning stove can emit the same amount of harmful particle pollution as up to six idling HGV lorries, so maybe put on a jumper or use the central heating instead?”

On a more up-beat note, Professor Lewis - who leads the team at the Wolfson atmospheric chemistry labs offers a simple, cost cutting tip that will leave you feeling immediately a little greener:

“If you’re out and about early on a cold morning and there's frost on your car, and you really need to use it, then reach for a scraper rather than a spray-can of de-icer. Each year Britain consumes tens of thousands of tonnes of organic solvents sprayed from aerosol cans. Once released into the air these chemicals contribute to the formation of photochemical smog, and some can wash off end up in streams and rivers, harming aquatic life as well. “

Stuck for a Christmas gift?

Consumers spend on average £363 on Christmas gifts for their family. Peter Ball, Professor of Operations Management at the York Management School shares his green tip:

“Try not to buy synthetic clothes like fleeces that give off microplastics which pollute our waterways. Instead try sourcing pre-owned garments made in wool, silk or other fabrics. You might find you get something more unique and a complete bargain.”

If like most of the population you have suffered from festive flu or too many hangovers by the time the New Year beckons, here’s our final simple sustainable tip from Professor Alastair Boxall, Department of Environment and Geography:

“If you have too many painkillers and remedies hanging around the house, don't throw them away, (or worst still flush them down the loo) dispose of them properly at the chemist. Studies by the University of York show that around 80% of unused medicines are thrown in the bin or flushed down the toilet. These can then enter waterways and soils where they can affect wildlife. By taking unused medicines back to your local chemist, where they will be disposed of properly, you will help reduce the amounts of medicines in the environment.”

The University of York places sustainability as a priority in learning and research, addressing the unprecedented global challenges of ensuring food security, increasing demand for resources and preventing environmental degradation. There are several centres working on this agenda including the York Environmental Sustainability Institute, Stockholm Environment Institute at York, Green Chemistry Centre of Excellence, Interdisciplinary Global Development Centre, Wolfson Atmospheric Chemistry Laboratories, BioYork and the Centre for Novel Agricultural Products.