A team of University of York graduates has won a national competition that could help take their video game into the homes of millions. 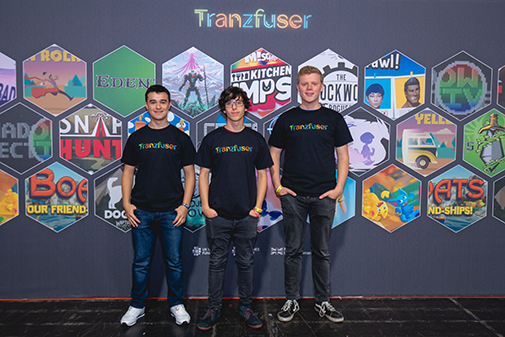 Mujo Games took part in Tranzfuser, the Government's video game development competition where graduates pit their original video games against one another to win up to £25,000 from the UK Games Fund.

The team won with an abstract rhythm game they created called Yellow Rock Road. Players take on the role of a time travelling band, and tap two buttons to keep in time with the music. It impressed the judges with its vibrant art, superb soundtrack and use of players’ own music libraries.

Joni Levinkind, lead programmer at Mujo Games who graduated from the University of York in Computer Science, said: “Winning Tranzfuser has opened so many opportunities for our team, and we really hope to make the most of them. We are all incredibly excited to find out what the future holds.”

“All of our team members have gained a range of skills from game development to management, marketing, and financial planning. We have learnt so much and feel more confident in our ability to succeed as independent developers within the games industry.”

The Government’s £5 million UK Games Fund (UKGF) is delivered by UK Games Talent and Finance and has so far supported 250 graduates and more than 90 companies from across the UK to create their own video games.

Over the summer, Tranzfuser gave 17 teams from across the UK £5,000 and gave them just ten weeks to develop their idea for a great game from concept to playable demo.

In September their games were showcased at the UK’s most popular consumer video games show, EGX, at the National Exhibition Centre in Birmingham.

They not only had to impress the 80,000 fans at EGX, but pitch their projects to a panel of industry experts in gruelling publisher-style sessions to be in with a chance of winning the funding. This process aims to help these early stage teams develop the crucial skills needed to pitch for funding in their future careers.

Margot James, Minister for Digital and the Creative Industries, said: “Over the past three years Tranzfuser has been identifying and nurturing the UK’s next top video game developers to turn their original and innovative ideas into reality. Mujo Games are worthy winners and I would like to congratulate all the teams who took part this year.

“Through our modern Industrial strategy we are committed to ensuring the UK games industry continues to translate its energy, skills and talent into even greater economic success.”

Joni and his team have been supported by the Santander Digital Leaders scheme, and received funding from the University of York’s Proof of Concept and Summer Accelerator Funds. They were also supported by the Digital Creativity labs during their time on the Transfuzer scheme.

Dr Nick Sephton, Digital Creativity Labs Senior Software Architect, said: "The Mujo Games team have been an important part of the game development community here at York. Pedro, Joni and Fynn were actively involved in our annual Game Jam and running the student games development society, and it was a pleasure to host them in Digital Creativity Labs for the summer on the Tranzfuser programme. They really made the most of the mentoring we provided, listening and responding to feedback, and taking every opportunity to learn, resulting in a game that's really fun to play!"