Researchers at the University of York, working with the world-famous Abbey Road Studios, have completed a trial of new audio technologies that allow listeners of popular music to sample a virtual reality sound experience. 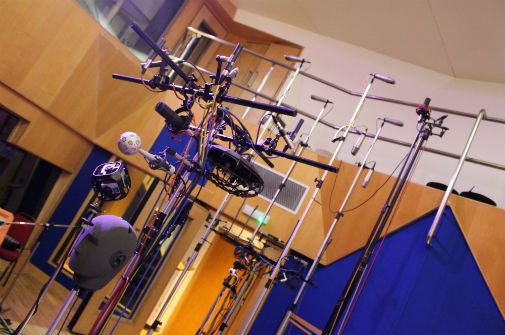 The team recorded a live popular music ensemble at Abbey Road Studios and with the help of more than 120 microphones captured the sound of the instruments from every angle.  Their novel recording methods aim to bridge the gap between traditional studio production and the creation of virtual reality musical experiences.

Dr Gavin Kearney, from the University of York’s Department of Electronic Engineering, said: “Despite the popularity of portable virtual reality technologies, it is still very much in its infancy and we have yet to fully realise its potential impact on the audio industry.

“There has been much experimental work with visual virtual reality capabilities, but very little on what can be done in music recording.  The main aim of our project is to prepare audio engineers for a new dimension in music production and how to adapt recording practices for fully immersive experiences.”

Cinema has seen success in providing an immersive audio-visual experience in 3D movie screenings, but the challenge for researchers outside of the cinema arena is identifying ways of recording music that will provide the listener with a high-quality experience through headphones as opposed to multiple speakers that take up a significant amount of physical space.

Working with London based band ‘Nova Neon’ at Abbey Road Studios, the team used special multi-channel microphone arrays to pick-up the full 360-degree sphere of sound, allowing the listener to pinpoint the instruments from various positions in the studio.

Dr Kearney said: “Unlike regular stereo playback, where the sound is heard ‘in-head’ we use surround technologies to create the feeling of what it is like to really be there at the recording session; the sound is all around you and you can readily tell where each member of the band is.

“The listener can move their head and the sound is tracked to create a realistic experience over headphones. Currently, we do this from a single point in the room, but the next challenge is finding a way to extend this experience to allow the listener to move freely throughout the space.

“This would allow the listener to tune in or dial-up particular parts of the music that they like the most.  From an artist’s perspective this technology expands the sonic landscape dramatically and will allow them to create extremely high quality tracks that engage their fans in a much more personal way.”

The team will be returning to Abbey Road Studios to trial how music could be recorded to allow the listener to move through the various sounds made by particular musicians.

Mirek Stiles, Head of Audio Products, Abbey Road Studios said: “We are currently witnessing an exciting transformation with how music could potentially be presented to the consumer in the future. As with any new technology, there are many questions that need to be addressed and working closely with university researchers is the perfect way to help Abbey Road stay close to cutting edge music production techniques.”

Music producer at Abbey Road Studios and postgraduate from the University of York, Hashim Riaz, said: “As a producer, I have previously been restricted by the limitations of stereo and wanted to expand the creative opportunities available.

“The identified recording techniques and workflows would enable musical creators to expand their sonic landscape from stereo to 3D and hopefully create a new generation of spatial musical content.”

The research, conducted by Dr Gavin Kearney in collaboration with Abbey Road Studios, will also feature in the AES International Conference on Immersive and Interactive Audio: Creating the Next Dimension of Sound Experience, hosted at the University of York in March 2019.